Former England captain Michael Vaughan calls Smith a ‘freak’ for being so prolific despite his offbeat technique. 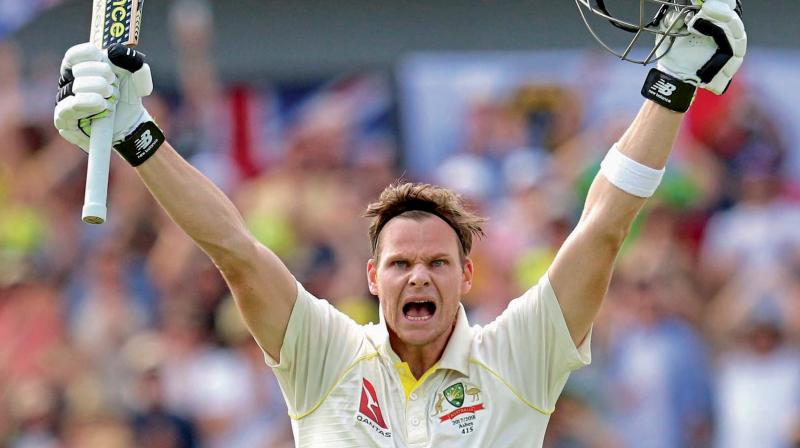 As Steve Smith ground out the English attack with a magnificent double century, one of Australia’s leading cricket writers Peter Lalor tweeted, “On cricket fields around Australia young batters are mimicking light sabre leaves and lunges in the popular Smithsonian style.”

Cricket writers are often accused of fanciful imagination and self-indulgent prose, but Lalor was giving in to neither. If anything, this was splendid tribute to the impact Smith is having on budding cricketers in his country; in fact all over the world

For those not initiated into the sport, Smith’s unorthodox batting style might seem out of a George Lucas Star Wars film rather than the staid Victorian Age where cricket has its origins: a Jedi who has strayed into the gentleman’s game through some inter-galactic mix-up as it were.

However, what Lalor’s tweet leaves unsaid (not a measure of his understanding, of course, for the social media platform affords only 280 characters!), is the universal sense of bewilderment at Smith’s amazing run making form over the past few years.

This bewilderment has engaged the best minds in the game itself and beyond for Smith’s success has been staggering. He has scored runs — and tons of them — everywhere, leaving critics, fans, and opponents gushing, gasping or both.

With 22 Tests centuries in just 59 Tests, and a current batting average of 62.86, he has moved ahead of some of the most illustrious names in the history cricket is now second only to Sir Don Bradman, the Bhishma Pitamah of batsmanship.

Bradman is the only cricketer who can be defined by a statistic — his phenomenal career average of 99.94 — and has been a crucial frame of reference in understanding the merit of batsmen before him and since.

There are countless who began brilliantly only to fade away, or settle for less than true greatness either because their vulnerabilities were found out or they got jaded.

To make runs and centuries with the consistency Smith has done reveals extraordinary traits.

Of four other batsmen who averaged in the 60s, Adam Voges, Graeme Pollock and George Headley played less than 25 Tests. England’s Herbert Sutcliffe played 54 and averaged 60.73, but his conversion rate for centuries pales in comparison. He had 16 to Smith’s 22.

Where Smith finishes when he hangs up his boots will determine which place he will occupy in the pantheon of greats. But that’s in the future. It is how he has grown into a monster run-machine monster from a pedestrian start gives his story a fascinating dimension.

At the start of his career he was a handy late order batsman and a useful part time leg-spinner: Hardly likely to become the player he has. In fact, his awkward batting technique at the crease was considered a handicap.

Nobody quite saw a long career in the Baggy Green for Smith.

For the record, in his first 22 innings he made a paltry 620 runs without a single century. The next 86 innings have yielded a whopping 5166 runs with 22 centuries! Only Sir Garfield Sobers, who started as a left-arm spinner and lower order batsman, has evolved more dramatically.

Smith’s success questions the relevance of orthodox technique particularly in the modern game. Almost everything about his approach — the shuffling footwork, the frequent thrusts and parries, jabs and nudges — seem wrong. But the scorebook throws up massive rebuttal.

What explains this? In my opinion, the virtues of orthodox technique are many, but cricket every now and then throws up ‘originals’ who are able transcend the limitations set up by copybook theorists and coaches with innate talent, ball sense and native intelligence.

Bradman too, for instance, was not in the classical mould. Javed Miandad certainly wasn’t, and Viv Richards — among a host of great West Indies batsmen — always tested the barriers with his athleticism and natural gift for strokeplay.

Of course, where these players show traditional virtues are in grit, determination, powers of concentration and an insatiable appetite for runs, big scores and records.

Former England captain Michael Vaughan calls Smith a ‘freak’ for being so prolific despite his offbeat technique.

In fact he thinks Virat Kohli is a freak too for similar reasons, which sort of sets the tone for an exhilarating contest between these fantastic batsmen in circa 2018.