Aus vs Ind: Lyon bowls Australia close to a series-leveling win in Perth

Australia need five wickets to level the series while India required 175 runs in a minimum 90 overs on the last day. 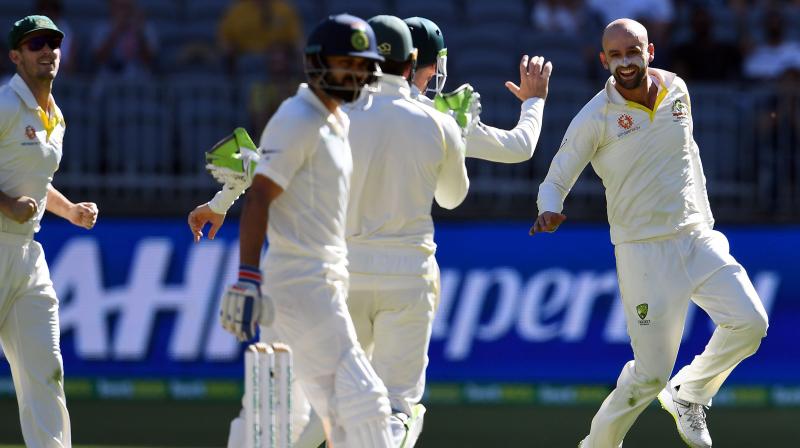 Kohli, who hit 123 in the first innings, pushed searchingly at Lyon, and edged to Usman Khawaja at slip. (Photo: AFP)

Perth: Offspinner Nathan Lyon bowled Australia close to victory Monday in the second Test on the fourth day with the prized wicket of Virat Kohli to leave India precariously on 112-5.

Australia need five wickets to level the series while India required 175 runs in a minimum 90 overs on the last day.

Continuing from where he left off in his first innings, Lyon extracted sharp turn and bounce to dismantle the much vaunted Indian middle-order.

In the closing stages, vice captain Ajinkya Rahane (30) cut a catch to Travis Head at point to leave Hunama Vihari (24 not out) and Rishabh Pant (9 not out) to survive 30 minutes before close.

Kohli, who hit 123 in the first innings, pushed searchingly at Lyon, and edged to Usman Khawaja at slip. It was the seventh time Lyon has dismissed Kohli - more than any other bowler.

In the next over, Vijay pushed tentatively at a delivery that spun off the rough and played on.

Lyon, with his 7-97 in the match, extended his tally against India to 79 wickets.

Australia pacemen Mitchell Starc (1-28) and Josh Hazlewood (2-24) struck in tandem to remove K.L. Rahul (0) and Cheteshwar Pujara (4). That was after the pair had frustrated India with a 36-run last wicket stand.

Swing bowler Mohammed Shami returned a career-best 6-56 to dismiss Australia for 243 in the second innings. Resuming on 190-4 after lunch, Australia lost 4-6 off 23 balls with Shami taking 3-5 in eight balls.

It was an outstanding effort by Shami in his 38th Test after going wicketless in Australia's 326 all out in the first innings. It was only the fourth time he has taken five wickets in an innings.