De Villiers retired from international cricket after a Test series against Australia in 2017. 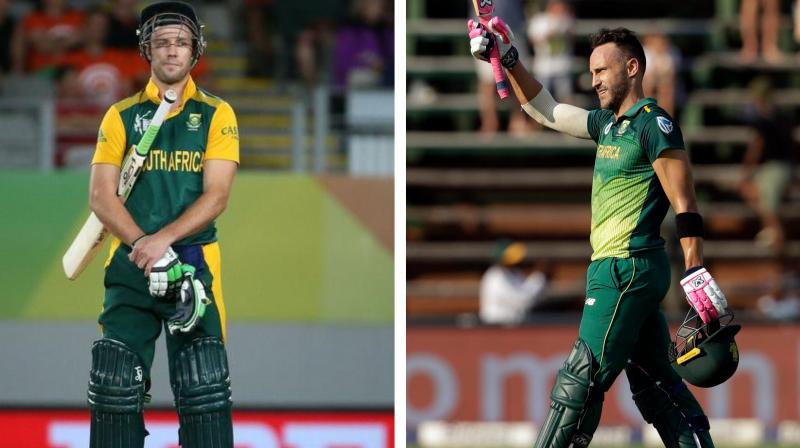 South African captain Faf du Plessis said on Monday that talks had begun aimed at getting star batsman AB de Villiers back into international cricket ahead of the T20 World Cup in Australia in October next year. (Photo: AFP/AP/PTI)

Paarl: South African captain Faf du Plessis said on Monday that talks had begun aimed at getting star batsman AB de Villiers back into international cricket ahead of the T20 World Cup in Australia in October next year.

"Those conversations have been happening two or three months ago," said Du Plessis, who was responding to a comment by new South African head coach Mark Boucher that he would welcome having De Villiers in his team.

Speaking after leading his Paarl Rocks team to an eight-wicket victory over the Boucher-coached Tshwane Spartans in the Mzansi Super League final at Boland Park, Du Plessis said his immediate focus was on preparing for a Test series against England which starts in Centurion on December 26.

"Obviously Test cricket is the most important thing right now but T20 cricket is a different beast," said Du Plessis.

De Villiers retired from international cricket after a Test series against Australia in 2017 and any comeback would probably be limited to Twenty20 internationals for a player who has become a specialist in the short form of the game. He made a half-century for Tshwane in Monday's final but will soon be on his way to Australia to play in that country's Big Bash.

"It's not a lot of time away from home," said Du Plessis. "Obviously with a full campaign you have to spend a lot of time on the road. The T20 World Cup is not too far away and there isn't a long list of T20 internationals over the season. Those conversations have taken place and they will take place before the next T20 international series starts."

South Africa will play three home T20 internationals against England and another three against Australia between February 12 and February 26.

Du Plessis welcomed the dramatic changes which have taken place in South African cricket over the past week, which have resulted in former captain Graeme Smith being appointed interim director of cricket and Boucher being made head coach.

"It was the dark ages last week and there is a little light this week," he said. "It's very important. It will help the dressing room and even the support of the team. Everyone wants the team to do well, everyone wants to make sure we get the right people in the right positions. It's exciting. I'm very excited with the start of this new journey."