Cheteshwar Pujara batted through the day to remain unbeaten on 130 and keep India afloat at 360 for six, 91 runs short of Australia. 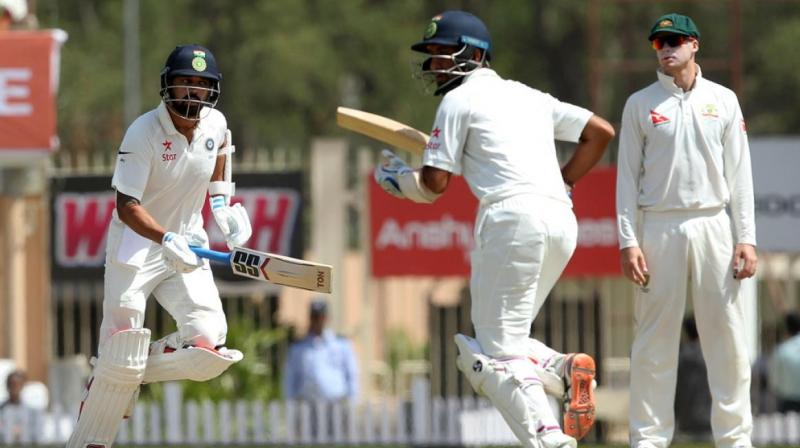 Murali Vijay and Cheteshwar Pujara put up 102 runs together for the second wicket in the first session and successfully countered the Aussie pace attack. (Photo: BCCI)

Ranchi: India opener Murali Vijay on Saturday said that centurion Cheteshwar Pujara's ability to absorb pressure makes it easier for the other batsmen to play their natural game.

Pujara batted through the day to remain unbeaten on 130 and keep India afloat at 360 for six, 91 runs short of Australia's first innings total of 451 on Day 3 of the their Test.

Heaping praise on Pujara, Vijay said: "Pujara has the game for it. He takes a lot pressure. His game is such that you can depend on him and play your natural game. It goes hand in hand. We both are in good form as well, so it helps the team at the moment."

Vijay and Pujara put up 102 runs together for the second wicket in the first session and successfully countered the Aussie pace attack.

"I think the game is evenly-poised. If we can get closer to the target and may be if possible extend a lead from there, it would be a good game in hand. They were bowling really tight to be honest. Myself and Pujara had a talk in between, the main goal was to see off the initial phase.

"We knew if we put them under pressure we can get lot of runs in second and third session. That was the basic idea. It came out pretty well. We could have been in much better position if I had not got out," he said.

Pacer Pat Cummins was the Australian wrecker-in-chief with figures of four for 59 in his comeback match after more than five years.

"He was bowling really well. He was sharp in the early spell. Then he was trying to bowl one line to us but as soon as the wicket fell, he had extra gas. So I think it was a good challenge for us to battle against him."

Among Cummins' four victims was Indian skipper Virat Kohli, who continued his lean patch and got out for six. But Vijay came out in his captain's support.

"He's a world class player. To judge any player on two three innings is unfair. It's just a matter of time for him to get back into runs. I think it would be sooner than later."

Vijay slammed 82 but failed to convert it into a hundred.

"I was not disappointed actually because the shot was on. With mid-on, mid-off inside, I thought it was my shot but situation was wrong I guess and the execution was not up to the mark.

"The previous ball before I got out, I saw there was not much spin. I thought fine, there was scoring opportunity for me. I backed my instinct but it did not come out my way," he explained.

On his 50th Test appearance, Vijay said: "It's a great feeling to be honest. I can still remember the first time I joined the Indian team. All I can say is I'm grateful, It's a great journey so far. Hopefully I can keep my fitness level and keep prolonging my career. The Lord's Test win is one thing that stands out."