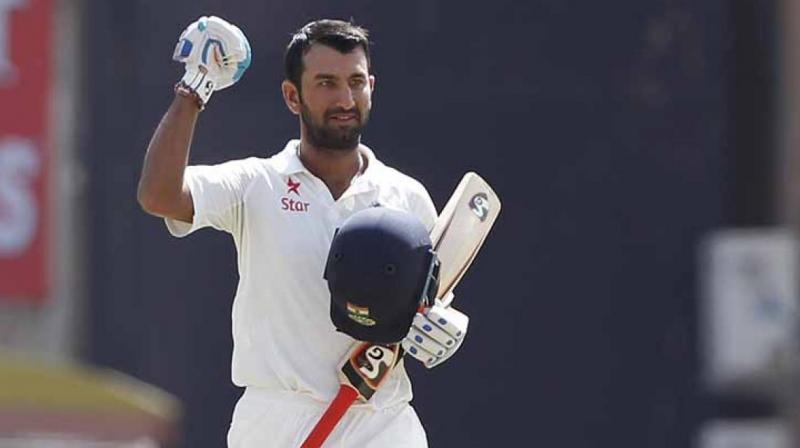 Cheteshwar Pujara became the first Indian batsman to score a hundred in the ongoing Test series against Australia. (Photo: BCCI)

Ranchi: While Virat Kohli’s shoulder injury seemed to have hampered his batting in the third Test, Cheteshwar Pujara led India’s charge on Day 3 of the third India-Australia Test here on Saturday.

Cheteshwar Pujara was batting on 130 as India reached 360 for six at stumps. Wicketkeeper-batsman Wriddhiman Saha (18) was batting alongside Pujara at close of play with India still trailing the visitors by 91 runs in their first innings.

Pujara's sublime century helped India stay on course for a big score despite Australia chipping away with crucial strikes, including the prized scalp of Kohli, Fast bowler Pat Cummins struck twice in the afternoon session as he got Kohli out cheaply for six but Pujara stayed firm at 109 at India's newest Test venue.

The hosts were 303 for four at tea, still trailing Australia by 148 runs in their first innings. Karun Nair (13) was batting alongside Pujara at the break.

Kohli, who turned out to bat at his regular number four spot laying to rest any injury concerns, could only last 23 balls before edging a catch to his opposite number Steve Smith at second slip.

The star batsman had injured his right shoulder after an awkward fall while fielding during Australia's innings on Thursday and stayed off the field for 400 minutes before taking crease.

Pujara, who was involved in a 102-run second-wicket stand with overnight partner Murali Vijay, did not let the momentum slip as he recorded his 11th Test century in his 47th match.

Cummins, making a Test return after playing his single five-day game in 2011, took his wicket count to three after getting Ajinkya Rahane (14) caught behind, ending a 51-run third-wicket partnership.

Earlier Vijay hit a gutsy 82 before undoing his hardwork by being stumped off Steve O'Keefe at the stroke of lunch.

The four-match series is evenly poised at 1-1.