India were 306 for six at stumps, still trailing the visitors by 91 runs. Pujara (130) and Wriddhiman (18) were batting at stumps. 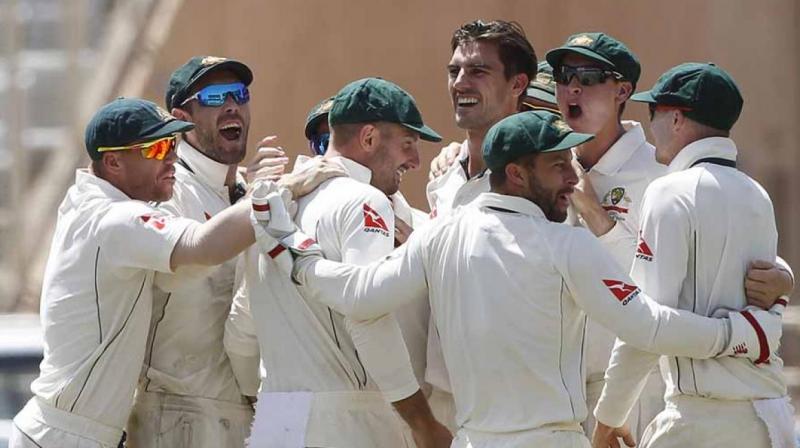 Pat Cummins, making a return after playing his only Test for Australia in 2011, got crucial breaks including the prized scalp of India skipper Virat Kohli. (Photo: BCCI)

India were 306 for six at stumps, still trailing the visitors by 91 runs in their first innings. Pujara (130) and Wriddhiman Saha (18) were batting at close of play.

Cummins, making a return after playing his only Test for Australia in 2011, got crucial breaks including the prized scalp of India skipper Virat Kohli.

The 23-year-old Cummins was ably supported by fellow paceman Josh Hazlewood and spinner Steve O'Keefe who took a wicket each on pitch that still looked good for batting.

Pujara, who was involved in a 102-run second-wicket stand with overnight partner Murali Vijay (82), was holding the innings together with his 11th Test century.

Cummins, who struck twice in the afternoon session, got Rahane caught behind and Hazlewood bowled Nair with a beautiful reverse swinging delivery in the final session.

Australia skipper Steve Smith kept up the pressure by rotating his bowling options as runs trickled in for the hosts in the final two hours of play.

India, whose innings run-rate is less than three an over, managed to score only 57 runs in the 31 overs bowled in the final session and lost two wickets.

Earlier Kohli, who turned out to bat at his regular number four spot laying to rest any injury concerns, lasted only 23 balls before edging a catch to his opposite number Steve Smith at second slip.

The star batsman had injured his right shoulder after an awkward fall while fielding during Australia's innings on Thursday and stayed off the field for 400 minutes before taking crease.

Kohli, who came into the rubber with double centuries in four successive series, has only managed 46 runs in his five innnings since the opener in Pune.

In the morning session, Vijay hit a gutsy 82 before undoing his hardwork by being stumped off O'Keefe at the stroke of lunch.

The series between the world's top two sides is tantalisingly poised at 1-1 with India needing at least a draw to have any chance of winning back the Border-Gavaskar Trophy.