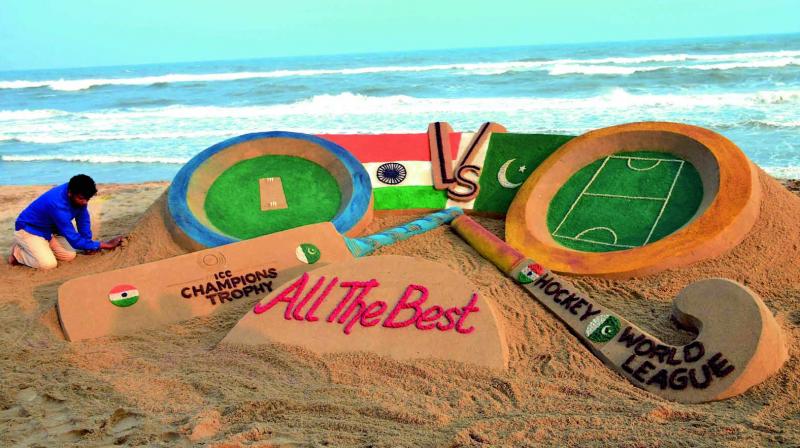 A sand art at Puri beach in Odisha on Saturday, the eve of the India vs Pakistan Champions Trophy cricket final. (Photo: PTI)

London: The game that always ‘stops two nations’ comes again to a third when title-holders India face Pakistan in the Champions Trophy final here on Sunday.

And the question millions of cricket fans around the world, possibly even a billion, are all asking is ‘which Pakistan will turn up?’

Will it be the team of their opening group match at Edgbaston on June 4, a 124-run thrashing by arch-rivals India, where some often thoughtless bowling and timid batting were only outdone only in their ineptitude by woeful fielding during an all-round performance labelled “shambolic” by Pakistan coach Mickey Arthur?

Or will it be the slick, skilled side who hammered England by eight wickets in the semi-finals, with Hasan Ali, the competition’s leading wicket-taker, spearheading a brilliant bowling effort as the previously unbeaten tournament hosts were dismissed for just 211 before the likes of Azhar Ali and Fakhar Zaman helped knock off the runs in dashing style?

When it comes to assessing most teams, the temptation is to look at their most recent result as a form guide.

But not only have Pakistan, the lowest ranked team in a tournament featuring the world’s top eight one-day international sides, long been regarded as world cricket’s most “unpredictable” outfit, they have lost all three of their previous knockout matches against India at International Cricket Council tournaments.

“We’ve got nothing to lose — the pressure is more on them (India),” Pakistan bowling coach Azhar Mahmood said.

The Oval was where, back in 1882, England’s defeat by Australia led to a mock obituary in a newspaper referring to the “ashes” of English cricket and hence the name for all future Anglo-Australian Test series.

But few would dispute that India-Pakistan is now the world game’s premier contest — certainly not the ICC who, by their own admission, now fix the draw at their events to ensure the Asian giants meet in the group phase.

“It is bigger than the Ashes — and expectation is high from both nations.”

Pakistan could make one change if Mohammad Amir, who missed the semi-final with a back spasm, is fit.

Yet such was the form of replacement left-arm quick Rumman Raees, who marked his ODI debut with two wickets, it is by no means certain even a fully fit Amir will come straight back into a side that has been well-led by Sarfraz Ahmed, in fine form as both wicket-keeper and batsman.

India, with skipper and star batsman Virat Kohli heading the tournament batting averages with a stratospheric 253, are a formidable outfit.

As well as Kohli, their batting line-up boasts the likes of dynamic opening pair of Rohit Sharma, fresh from a hundred against Bangladesh, and Shikhar Dhawan with Yuvraj Singh, former skipper Mahendra Singh Dhoni and Hardik Pandya to come in if needed.

They also have a well-balanced attack, with new-ball bowlers Bhuvneshwar Kumar and Jasprit Bumrah supported by contrasting spinners in R. Ashwin and left-armer Ravindra Jadeja, with the like of Kedar Jadhav, as he showed against Bangl-adesh, also able to chip in with useful wickets.