Since Shakib Al Hasan was promoted to number three, the number one all-rounder has been rock solid for the Bangladeshi team. 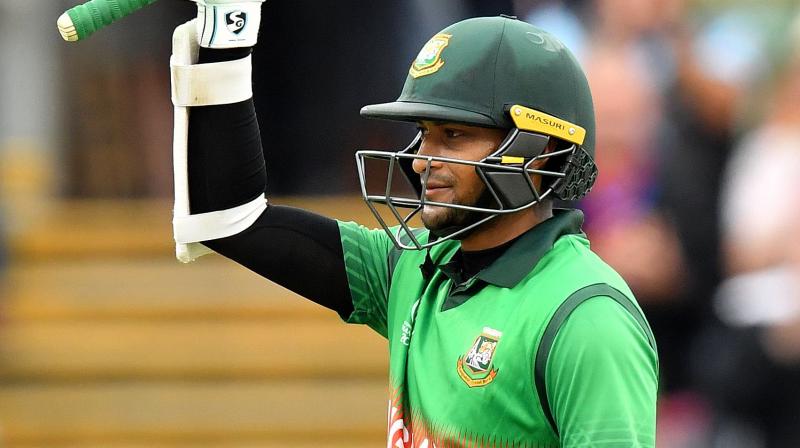 Mumbai: Since Shakib Al Hasan was promoted to number three, the number one all-rounder has been rock solid for the Bangladeshi team. After his promotion, the former captain has performed tremendously.

The former Bangladeshi captain has struck two hundreds, including the recent 124 against West Indies during their recent run chase which was Bangladesh’s second highest-ever successful run chase.

Before that match, Shakib started his excellent form by striking an important 75 which propelled Bangladesh to post 330 runs against South Africa. His knock of 75 was vital in forming a crucial partnership with team-mate Mushfiqur Rahim who also notched 78 to put Bangladesh in a commanding position.

After the match against South Africa, Shakib scored a crucial 64 to help Bangladesh post a modest total of 244 versus New Zealand. During that match, Shakib was the only batsman who managed to go past 30.

However, Shakib’s 64 wasn’t enough to help the ‘Tigers’ defend a modest target of 245 against a resilient New Zealand batting side, which somehow managed to cruise past the total.

Following the match against New Zealand, the Bangladesh team faced a formidable England team, which posted a mammoth total of 386-6, and all credit goes to destructive England opener Jason Roy, who scored a massive 153.

In that match, Shakib and Mushfiqur again formed a crucial partnership to help Bangladesh somehow stay in the run chase. Nonetheless, Shakib’s 121 and Mushfiqur’s 44 proved to be insufficient as Bangladesh lost match by a huge 106 runs margin.

However, the match against West Indies proved to be a real test for the Bangladeshi team as the Caribbean team posted a decent total of 322. Despite the huge target, the Bangladesh team crossed the line without much hiccups. And, once again the team relied on the 32-year-old to take the team over the line.

The former Bangladeshi captain scored an impressive 124 from 99 balls along with Liton Das who scored 94 to take the team home. He’s now fetched 384 runs in just four innings at the World’s biggest stage, 41 runs clear of top scorer Aaron Finch who have played one innings extra.

This proves how much the Bangladeshi team revolves around Shakib to guide the team home or to anchor the innings. Shakib always has been the core of the Bangladesh cricket team. The team relies on him to either score or take wickets.

Earlier, when he used to bat at three, he amassed 492 runs at an average of 41. However, later on, Shakib was demoted to number five, and following his dismal performances while batting at five, he expressed his desire to bat at number three again.