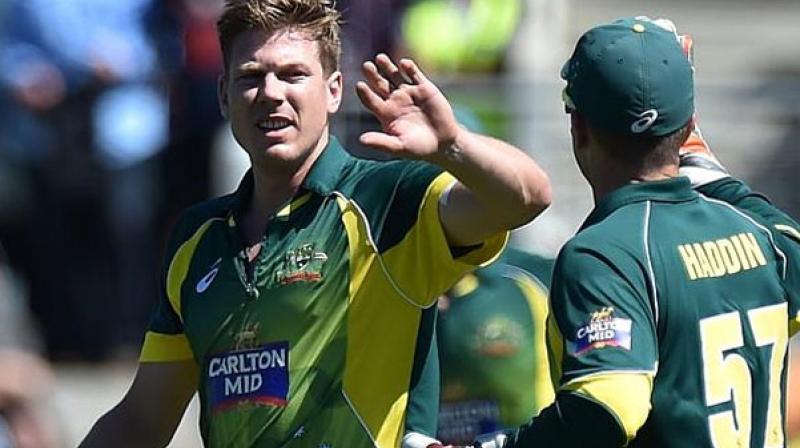 Faulkner has so far played 67 ODIs for Australia in which he has grabbed 95 wickets. (Photo: AFP)

: today recalled the pace duo of James Faulkner and Nathan Coulter-Nile for the five-match ODI series against next month but Mitchell Starc was left out owing to a foot injury.

Faulkner, who was man of the match in the 2015 World Cup final, was omitted from 's Champions Trophy squad. The 27-year-old has played 67 ODIs, grabbing 95 wickets.

and are set to play five ODIs and three Twenty20s between September 17 and October 13. "Pacemen James Faulkner and Nathan Coulter-Nile have been recalled to 's ODI squad for their tour of in September and October, as have all-rounders Ashton Agar and Hilton Cartwright," Cricket said in a statement.

The 29-year-old Coulter-Nile, who has also been picked in the Twenty20 squad, has been battling injuries in recent years, which has resulted in a mere 16 ODI appearances. He has 27 wickets to his credit in the 50-over format.

Cricket stated that Coulter-Nile had been picked after having "shown impressive signs in the Indian Premier League earlier this year". The pacer turns up for Kolkata Knight Riders in the IPL.

"Nathan brings raw pace to the side with good variation. "It is great to see him back from injury and we are hopeful he will have a big impact in this series," selector Trevor Hohns said.

"James Faulkner is a solid one-day campaigner and is very familiar with subcontinent conditions, coming off a very good tour of last year. We hope that he will take his chance in returning to the one-day side," he added.

In the left-out list, Starc was joined by all-rounder Moises Henriques and the injured troika of Chris Lynn, John Hastings, and James Pattinson. All of them were a part of the squad that competed in the Champions Trophy in June.

"Starc has been rested for the entire tour as he continues his recovery from a foot injury and he will now target a return in the domestic one-day cup for NSW Blues ahead of the Magellan Ashes," the CA said.

In the T20 squad, pacers Jason Behrendorff and Kane Richardson have been selected, while Josh Hazlewood has not been included for the T20 leg of the tour. Veteran all-rounder Dan Christian and wicketkeeper- batsman Tim Paine have been named, while Coulter-Nile has also been named for the 20-over matches.

"Dan is a very experienced all-rounder who can be a very dangerous batsman. He had a solid IPL season this year and we believe his bowling will be well suited to the conditions we will face in ," T20 selector Mark Waugh said of Behrendorff.

Skipper Steve Smith and David Warner have returned to the T20 side after missing this year's series against due to a clash with the Test tour of . Chennai, Bengaluru, , and Kolkata are scheduled to host the five-match ODI series while , and Guwahati will be venues for the T20s.