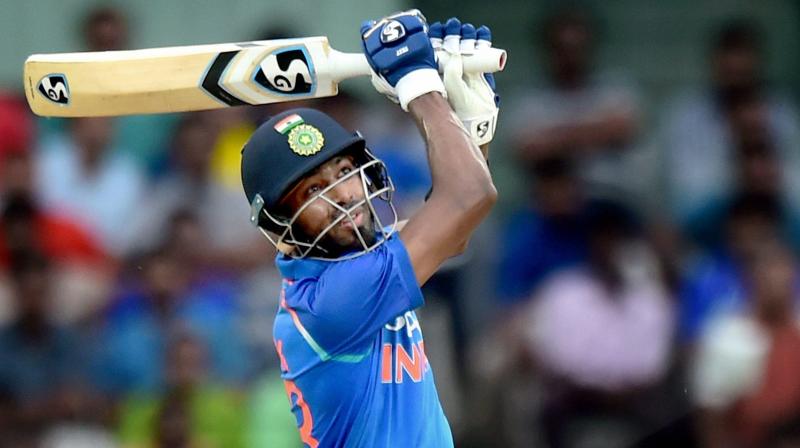 India's Hardik Pandya plays a shot during the first India-Australia One Day International (ODI) cricket match being played at the M A Chidhambaram stadium in Chennai on Sunday. (Photo: PTI)

Chennai: Fortunes swung like a pendulum, but India held their nerve to post a 26-run win (D/L method) over Australia at the M.A. Chidambaram Stadium on Sunday to go 1-0 up in the five-match series.

A tenacious M.S. Dhoni (79 off 88 balls) and a counter-attacking Hardik Pandya (83 off 66 balls) came together in a brilliant rescue act as India rallied their way from a horrendous start to post a challenging 281/7 in 50 overs.

A two-hour rain delay tilted the contest in favour of Australia as the target was revised to 164 in 21 overs. But a brilliant bowling performance by Pandya (2/28) and wrist spinners Yuzvendra Chahal (3/30) and Kuldeep Yadav (2/33) pinned Australia down to 137/9.

Once Jasprit Bumrah landed the first punch on the Aussies for the wicket of debutant Hilton Cartwright, the visitors started crumbling like a cookie.

The capacity Sunday crowd booed every Aussie batsmen who walked in and such hostility was startling coming from Chepauk fans who had famously raised a toast for a victorious Pakistan team in 1999.

With the required rate soaring high, the onus fell on a big-hitting Glenn Maxwell (39 off 18 balls) who showcased some fireworks before vanishing like a smoke. He fell prey to a foxy leg-spinner Chahal.

The match as a contest was over when Marcus Stoinis was caught at mid-wicket leaving Australia 76/6. The afternoon had elements one wouldn’t normally associate with one-dayers in the country — overcast conditions, a bouncy pitch and a slow outfield. Aussie pacers Pat Cummins and Nathan Coulter-Nile bowled a fantastic opening spell. While Cummins’ searing pace was hard to tackle, Coulter-Nile had India reeling with a probing length.

Reputations counted for nothing as India’s celebrated top-order was exposed for their lack of technique in playing the outside off-stump line against the moving ball. Electing to bat, India were reduced to 11/3 with Coulter-Nile accounting for all of them.

Ajinkya Rahane, Virat Kohli and Manish Pandey were all guilty of chasing wider and fuller balls. Rahane was caught behind while trying to slash an away swinging delivery.

Kohli was dismissed for a four-ball duck evoking an eerie silence from the crowd. It required a brilliant catch – a one-handed effort — by Maxwell at backward point to see the back of India skipper.

Two balls after that, Manish Pandey nicked one behind to expose India’s middle-order earlier than expected. Opener Rohit Sharma (28 off 44 balls), who was dropped by Steve Smith at second slip earlier, joined hands with Kedar Jadhav to put on 53 runs for the fourth wicket before he perished to a short ball off Marcus Stoinis.

Dhoni and Pandya came together at 87/5 and the duo’s focus was on picking up singles and doubles before counterattacking their way to recovery.