Warner ended the series with a dismal and the lowest-ever average of 9.5. 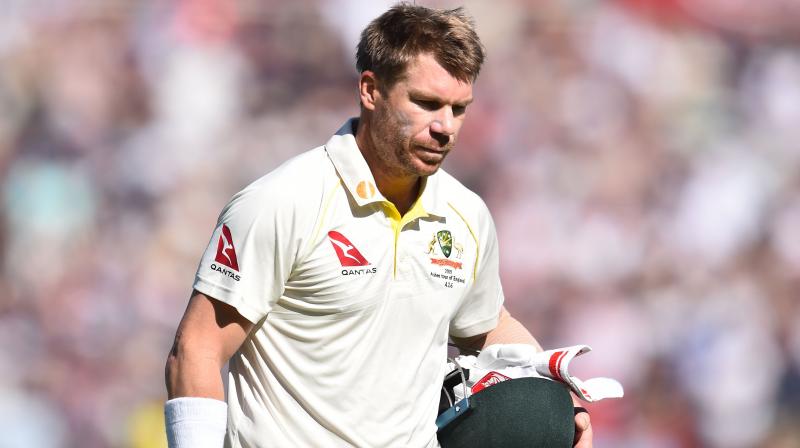 After failing to perform in the recently concluded 2019 Ashes series, former Australian batsman and current head coach of the Australian cricket team, Justin Langer has backed the second highest run-getter of the 2019 Cricket World to return to form. (Photo:AFP)

Mumbai: After failing to perform in the recently concluded 2019 Ashes series, former Australian batsman and current head coach of the Australian cricket team, Justin Langer has backed the second highest run-getter of the 2019 Cricket World to return to form.

The left handed batsman, who scored 95 runs during the five-match Ashes Test series, had managed to get pass the double digits  only two times in his 10 innings.

Warner ended the series with a dismal and the lowest-ever average of 9.5. Hence, the left-handed southpaw became the first-ever opening batsman to register eight single-digit scores in a single Test series.

Warner’s highest score was only 23, while the remaining were majorly single-digit scores. During the whole series, Warner was dismissed by Stuart broad seven times.

However, after amassing a phenomenal 647 runs during the 2019 World Cup, no one expected the 32-year-old to mis-fire in the highly anticipated Ashes Test series. Before the Ashes, the World Cup Champion averaged 48.2, but after his dismal series, his average dropped to 45.75.

After serving a one year’s ban for his alleged involvement in the sandpaper-gate scandal, Warner along with Steve Smith and Cameron Bancroft were desperate to shut the critics. But, among the trio, only Smith has been able to shut the haters, especially, after having amassed 774 runs.

While the duo failed to live up to their standard. Bancroft managed to notch just 44 during the first three Ashes Test match. Along with Bancroft, Usman Khawaja also dropped from Australia’s Ashes squad after managing to score just 122 from three matches.

However, dropping Cameron Bancroft and Usman Khawaja is justified as they failed to convert their potential starts into a big innings. Usman Khawaja also failed to perform at his best during the 2019 World Cup, in which he scored only 319 runs at an average of 35.11.

However, when it comes to dropping Warner, who is Australia’s dependent opening batsman right now, might not be a good idea as whenever Australia look for a flying start, Warner is there to guide the Aussies to a solid start.

David Warner, who is known for thunderous striking ability, also has the maturity and experience to guide his opening batsman. During the recently concluded 2019 World Cup, we also saw Warner taking the anchor’s role while his partner and captain Aaron Finch took the onus to lead the batting attack.

Besides, Warner’s batting prowess, his ability to take astonishing catch in the slips makes him an integral member, who just can’t be dropped immediately.

Moreover, Australia still hasn’t found a suitable replacement, who can strike the ball as good as Warner. So, before dropping Warner, the selectors have a lot of thinking to do.

Nevertheless, the exact reason behind Warner’s failure in the recently concluded hasn’t been found yet, but according to Australia’s head coach Justin Langer, David Warner seemed to have focussed more on Stuart Broad than on playing cricket.

Lastly, the former Australian cricketer added, "I've seen it before. Even with the great players ... Gilly (Adam Gilchrist) with Andrew Flintoff.” "I used to have it against Murali (Muttiah Muralitharan) and I couldn't solve the issue. "It's so hard when you try to problem solve in the middle of a big series ... he'll probably be very relieved he gets on the Qantas flight in a day's time and doesn't have to face Stuart Broad for a while."