Teen sensation Prithvi Shaw, who is on a roll, got Mumbai off to a blistering start. 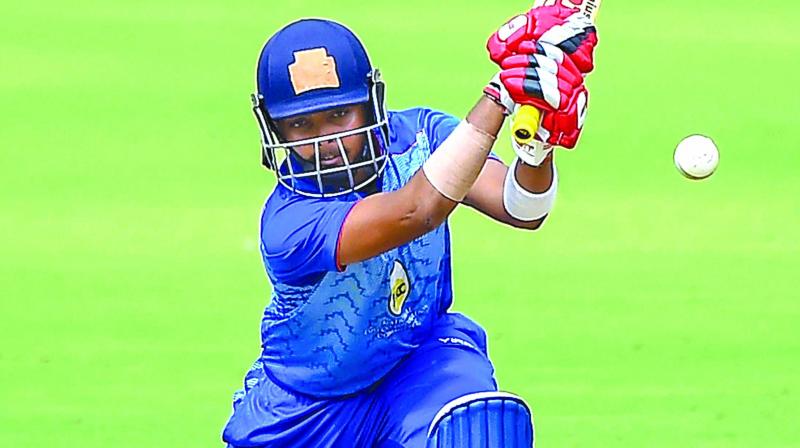 BENGALURU: Rohit Rayudu’s unbeaten knock of 121 went in vain as Mumbai defeated Hyderabad by 60 runs (VJD method) to enter the final of the Vijay Hazare Trophy on Wednesday.

The last time they had played the domestic one-dayer final, in 2012, Mumbai went down to Sourav Ganguly’s Bengal.

Rain halted play when Mumbai were halfway through their chase of 247. Mumbai were cruising at 155 for two in 25 overs. As the game never resumed, Mumbai won via VJD method.

Defending a total of 246 against the star-studded batting attack of Mumbai wasn’t easy and Hyderabad’s bowlers learned it the hard way. Teen sensation Prithvi Shaw, who is on a roll, got Mumbai off to a blistering start.

Hyderabad’s Ravi Kiran, stationed at fine-leg, was guilty of letting Prithvi off the hook twice, in the same over, off pacer Mohammad Siraj.

Rohit Sharma (17 off 24balls) who looked solid at the crease was deceived by an arm-ball off Mehdi Hassan, Hyderabad’s leading wicket-taker this season. By then, the opening stand had fetched Mumbai 71 runs in 10 overs with Prithvi being the dominant partner with 54 runs. Soon after Rohit’s dismissal, Hassan got rid of Prithvi.

Prithvi’s enterprising knock of 61 was punctuated with eight fours and two sixes. The unbeaten third wicket stand between Ajinkya Rahane (17 not out) and Shreyas Iyer (53 not out) ended Hyderabad’s hopes.

Earlier, Hyderabad who elected to bat didn't have an auspicious start as their openers Akshath Reddy (7) and Tanmay Aggarwal (11) were dismissed cheaply by Tushar Deshpande. Rohit Rayudu looked fluent but he lacked support from the other end. From four down for 93 in 25 overs, Rohit's third List-A hundred, comprising eight fours and four sixes, lifted Hyderabad to 246 for eight.