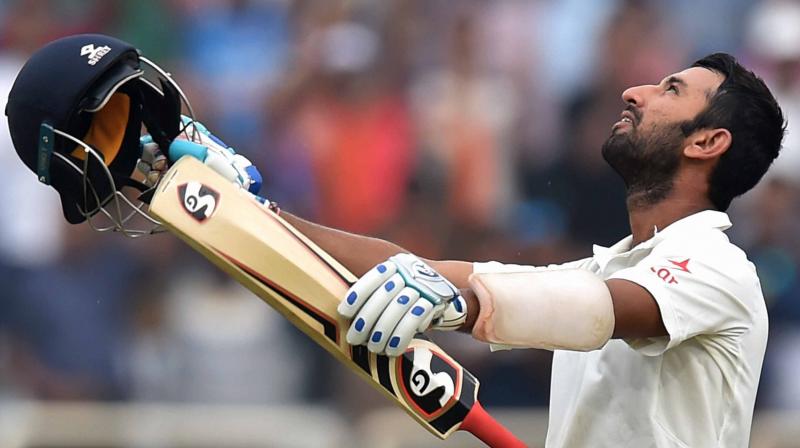 Ranchi: Cheteshwar Pujara scored a patient double hundred as he and fellow centurion Wriddhiman Saha put India in a commanding position against Australia in the third Test at Ranchi on Sunday.

After declaring their first innings on 603 for nine late in the final session on day four, the hosts rattled Australia with two strikes including the big wicket of David Warner (14).

Ravindra Jadeja disposed of both Warner and nightwatchman Nathan Lyon (2) in an absorbing final session of play.

Before bamboozling the Australian batsmen with his left-arm spin, Jadeja also delivered an unbeaten 54.

But the day belonged to Pujara (202) and Saha (117), who put on 199 for the seventh wicket to frustrate an Australian bowling attack that failed to take a wicket in the first two sessions.

Pujara, who resumed the day on 130, hit 21 boundaries in an otherwise sedate innings which lasted for 525 balls -- the longest innings in terms of balls faced by an Indian Test player.

The 29-year-old -- whose top Test score is 206 not out against England in 2012 -- got to his double century with a flick to square leg off Nathan Lyon, pumping his fist in a rare show of emotion as his teammates cheered from the balcony.

But he was out in Lyon's next over, lobbing a catch to midwicket. He walked back to the pavilion to a standing ovation and a few handshakes from the opposition players.

Saha, who hit seven fours and a six, soon followed his overnight partner after falling to left-arm spinner Steve O'Keefe.

Jadeja came in at number nine and played a useful cameo, putting on 54 for the ninth wicket with Umesh Yadav (16).

Earlier in the day Saha and fast bowler Josh Hazlewood had exchanged words at the end of an over before umpire Ian Gould quickly stepped in to caution the players.

The four-match series for the Border-Gavaskar Trophy is tied 1-1.