Coulter-Nile wasn’t amused at the wait. Nor at playing at an ungodly hour. 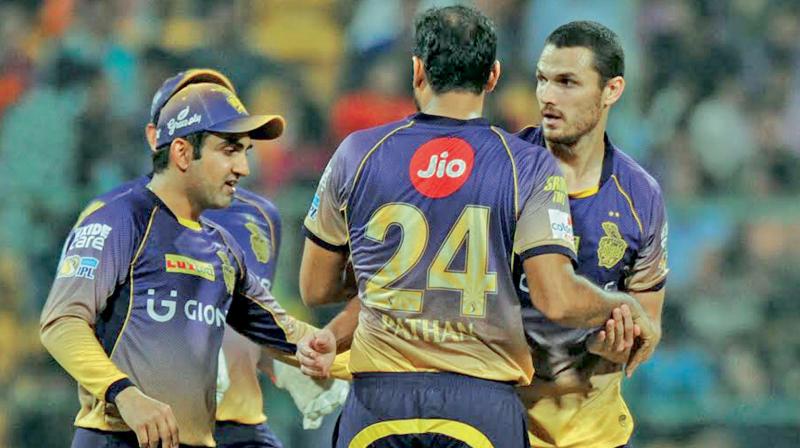 Bengaluru: It’s been a second coming for Aussie Nathan Coulter-Nile. At 29, he’s missed more games than having played them for his country and in the IPL, owing to different injuries.

Returning to the eleven after almost two weeks following a blow on his helmet by a Dan Christian bouncer against RPS, Coulter-Nile, brought on late by Gautam Gambhir struck it rich with a miserly, match-winning 3-20 from four overs.

“I don’t know if 130 was a par score but it was a difficult wicket definitely,” said the Aussie.

“It was holding up. The cross seamers were holding up and slower balls were getting a little bit of grip. Tough to play on,” added Coulter-Nile after the seven-wicket win set them up against Mumbai Indians in the Qualifier 2 on Friday.

Having restricted Sunrisers Hyderabad to 128 for seven, it was an agonising wait for KKR for more than three hours. At one point, it looked like, SRH may go through if the rain persisted and not allowing KKR a chance to bat.

But Coulter-Nile wasn’t amused at the wait. Nor at playing at an ungodly hour.

“No one really got nervous till they went for that last look at 12.30. It sort of looked like that they didn’t want to play.  But yeah, there was so much time. It’s 2 o clock.

“Rules probably need to be looked at. You can’t play cricket at 2.00.”

“It wasn’t a big target. On that wicket you’ll never really know. We thought, you got 10 wickets in hand, six overs. There’s no point trying to work yourself in.”

Having come through, the speedster believes KKR are up for the might of the Mumbai Indians while adding that the advantage of knowing the turf would help them.

“We have to rest up tonight and get as much recovery as we can tomorrow. We’ve played them twice already, we know what they’re going to bring. We know what the wicket’s like, which is an advantage to us.

“I think they haven’t played here in a while. We’ll do our processes on Friday.”