India turn it upside down

As Dicky Rutnagur drove me into the ground for the return leg, the BBC crew were leaving as a strike had been called. 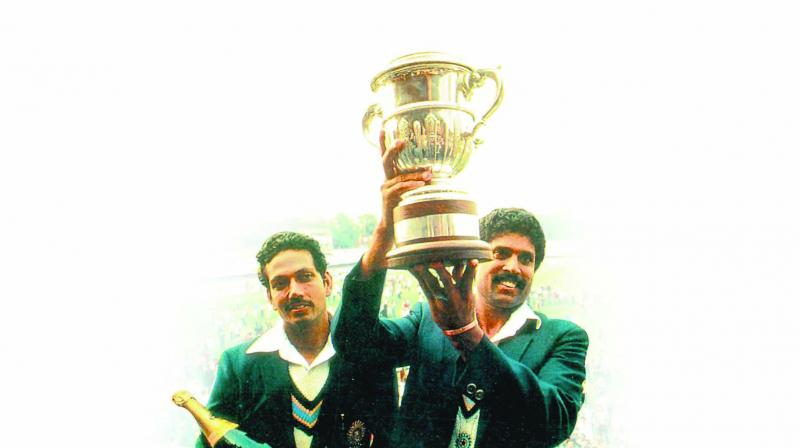 India were one of the least fancied teams to win the World Cup. At 66-1 before the competition, only Zimbabwe was considered a longer shot. The build-up to the World Cup of 1983 was not as hopeless as the first two. The birth of hope was sighted in the remote city of Berbice in Guyana in late March, just months ahead of the World Cup in June. Kapil rattled off a 50 off 22 balls and India made their highest ever score then against the West Indies and won by 27 runs.

It was a virtual replay in the opening game of the World Cup with India containing the West Indies after Yashpal’s determined effort to shore up the innings. The opening game upset may have been forgotten by the time India played the return game against the West Indies at The Oval and were hammered. In between, they fell heavily to Australia at Nottingham and didn’t seem as good as the day on which they surprised the defending But Zimbabwe had stunned Australia, which meant it was Even Stevens until India went to Tunbridge Wells for a game that became unforgettable for Kapil Dev’s 175 not out.

As Dicky Rutnagur drove me into the ground for the return leg, the BBC crew were leaving as a strike had been called. Kapil had wished to know about improving the Net Run Rate and chose to bat though the pitch was a bit damp (“gila hai” he said). He walked out at 9 for four and it was 17-5 before he faced a ball, from where he took India to a defendable total with the greatest reconstructive one-day innings imaginable. It rained sixes after lunch as the ball soared into the rhododendron bushes quite frequently.

India then demolished Australia after making close to 250 with Madan Lal and Roger Binny weaving magic spells of swing and seam to win by a handsome 118-run margin and qualified for the semi-final against England. Little did England know that they had to face a bit of leg theory by Kirti Azad’s restrictive off spin of 12 overs for 28 that choked their middle overs. A target of 214 was never likely to test India too much.

My betting slip of 660 pounds promised by Ladbrokes to my flutter of ten pounds secure in my pocket, I took a taxi driven by a West Indian who said he would be partying that evening after his team won. Ha! Ha! The Indians had a major surprise for the defending champions even if they managed only 183, with Srikkanth confessing to partner Mohinder that he couldn’t get bat to ball. Told to go for broke, Chikka cut loose to make the top score of 38. Even so, the target seemed to shrink as Viv Richards dug into Madan Lal and Binny cover-driving fluently and hard.

Madan Lal begged “Kapil Phaji” for one more over and Kapil himself ran like a leopard after prey and pouched the mishook moving 20 yards from square leg and the rest is history. Jimmy ran to pull a stump from the batsmen’s end after catching Michal Holding plumb in front. He missed plucking the stump, but that was the only mistake the man of the match in the semi-final and final made. Champions India had turned the cricket world upside down, bowling out the Windies so cheaply that shattered fans were seen fallen to the turf literally sobbing as Kapil Dev stood majestic on the balcony at Lord’s receiving the Prudential World Cup from HRH the Duke of Edinburgh. The time was 7.30 in England and 12 in India — Another tryst with destiny for the nation at midnight!