Watch: Gulbadin Naib tries to obstruct Eoin Morgan’s way to get him out

Naib seemed apologetic about the incident and picked up Morgan's bat to hand it over to him. 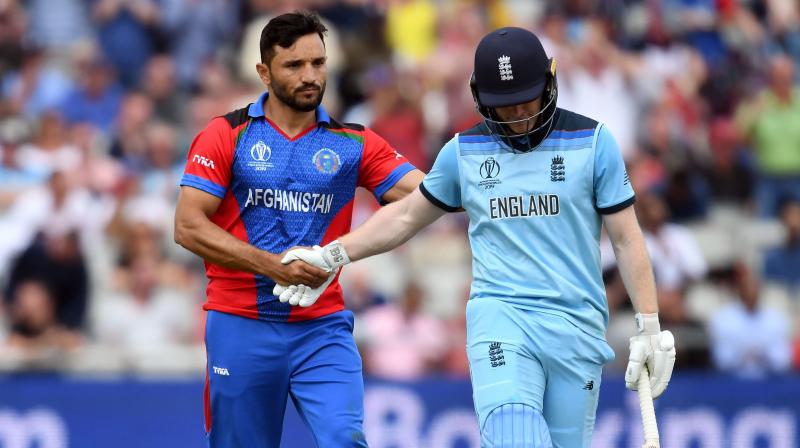 Morgan reached his ton in only 57 balls against Afghanistan. (Photo: AFP)

Mumbai: England ODI skipper Eoin Morgan on Tuesday recorded the fourth fastest century in the history of the World Cup at the Old Trafford.

Morgan reached his ton in only 57 balls against Afghanistan. The left-hander started displaying his aggression right from the start, steering England to a massive total of 397.

Morgan also whacked 17 sixes, recording the most number of sixes by a batsman in a single ODI match.

However, one moment in his innings which has grabbed much attention was when he was obstructed in the field by Afghanistan skipper Gulbadin Naib.

The incident occurred in 32nd over, with Morgan just having come out to join Joe Root.

Physically taking the bat out of Eoin Morgan hands might be the only way to stop him today! 😅 #ENGvAFG#AfghanAtalan#WeAreEngland pic.twitter.com/pfhg1DT8Hx

While facing his sixth ball, Morgan tried to connect the delivery from Naib for a quick single but the ball bounced off Morgan's body a little further away.

Morgan tried to grab a quick single out of it but decided to return back to his crease. At this point, Naib stretched out his hands and seemed to try to obstruct Morgan's way, almost as if to give fielder Najibullah Zadran time to come in and run Morgan out.

The collision knocked Morgan's bat out of his hands but the English skipper was successful to make his way back into his crease.

Naib seemed apologetic about the incident and picked up Morgan's bat to hand it over to him.