Chahal said he enjoys a good rapport with Kuldeep and the two help each other in strategising. 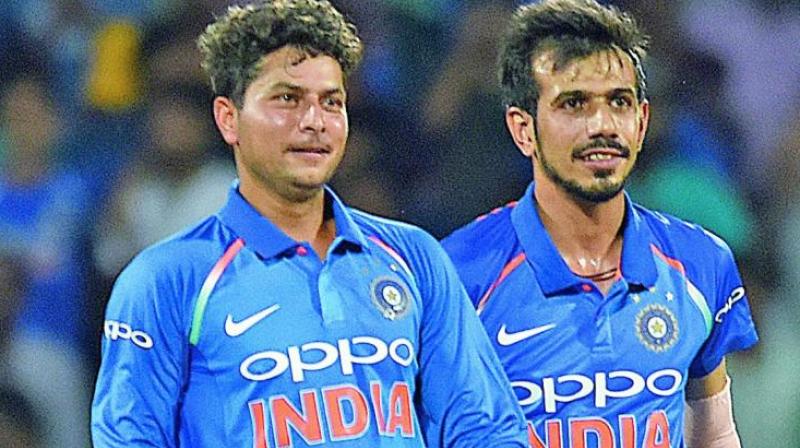 Spinners Kuldeep Yadav (left) and Yuzvendra Chahal took five wickets between them in the first ODI.

Chennai: Leg-spinner Yuzvendra Chahal and left-arm ‘chinaman’ Kuldeep Yadav have formed a lethal combo with skipper Virat Kohli reposing a lot of faith in them. Chahal said he enjoys a good rapport with Kuldeep and the two help each other in strategising.

“If he bowls first he speaks about from where the ball is turning and if I bowl first then I discuss with him on how to bowl to a particular batsman. Both of us go for the wickets from the start, because you win a match by taking wickets and not shying away from it. We have to change our plans when someone is attacking, so we plan not to give too many runs to give the bowler from the other end a chance,” explained Chahal who took three wickets including that of the the dangerous Glenn Maxwell who was going all guns blazing.

The 27-year-old from Haryana said he was confident against Maxwell. “Mahi bhai and Kohli told me to bowl Maxwell a turning delivery and keep checking his feet. So my idea was to bowl to him outside the off-stump. If he hits a good shot then it’s fine but if he hits he should hit from outside the off-stump because he is strong on the leg side,” he said. Leg-spinners are known to attack and take wickets, but Chahal also believes in taking a step back. “When your captain is so attacking you get freedom to attack more. Sometimes, we also have to take a step back,” he said.

Chahal said Australia had an advantage in the rain-shortened game.

“The rule was not for a 20-over game and the extra fielder was always in the inner circle. But the plus (for India) was that wicket was turning and the way our medium-pacers bowled at the start helped us put pressure on them,” he added.

Chahal dismissed Smith’s suggestion that two new balls in a 20-over game were tough to handle. Whether it’s a new or old ball doesn’t matter,” he said.