The former India player, who won the man of the match award, scored 71 off just 48 balls, which included six fours and three towering sixes. 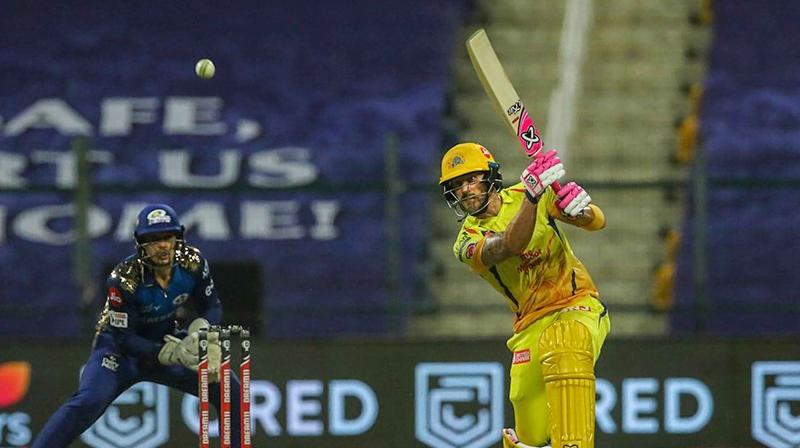 du Plessis played a rather uncharacteristic game, as he let Ambati Rayadu play the aggressor in the CSK innings, while he remained the sheet-anchor. The former India player, who won the man of the match award, scored 71 off just 48 balls, which included six fours and three towering sixes.

Earlier in the innings, things looked very difficult for CSK, as the team lost star Aussie batsman Shane Watson and Murali Vijay in quick succession. However, a 115-run partnership between du Plessis and Rayadu stabilised the CSK innings.

After the dismissal of Rayadu, the team seemed to be losing some momentum. However, Sam Curran (18) and Ravindra Jadeja (10) played quickfire knocks to help Chennai reach the target comfortably.

Ultimately, Dhoni remained unbeaten on nought, as du Plessis hit two consecutive fours off the bowling of Trent Boult to end the game for CSK.

The Mumbai Indians used five bowlers -- Boult, James Pattinson, Jusprit Bumrah, Krunal Pandya and Rahul Chahar. All of them took one wicket each. But except Boult and Pattinson, whose economy rate remained under seven runs per over, others went for too many runs.

This is the first win in six matches for CSK against MI since beating them by one wicket in the opening game of IPL 2018.

In the first innings, Mumbai Indians set a target of 163 for the Chennai Super Kings after making 162 runs for the loss of nine wickets.

For Mumbai Indians, Saurabh Tiwari was the top performer, scoring 42 off just 31 balls. Quinton De Kock, the wicketkeeper-batsman, scored 33 and had a 46-run opening partnership with captain Rohit Sharma.

Mumbai Indians were seemingly doing well at 92-3 after 11 overs. However, the team continued to lose wickets at regular intervals, with no one being able to stitch a decent partnership. A lot was expected from power hitter Kieron Pollard but he only scored 18 runs and before being dismissed by Lungi Ngidi.

Ngidi was the pick of the bowlers, taking three wicket while giving away 38 runs. Jadeja and Deepak Chahar were the other top performers, both taking two wickets each.