Tharanga, who hit a brilliant 112 not out in the previous match, hit five boundaries during his 80-ball knock. 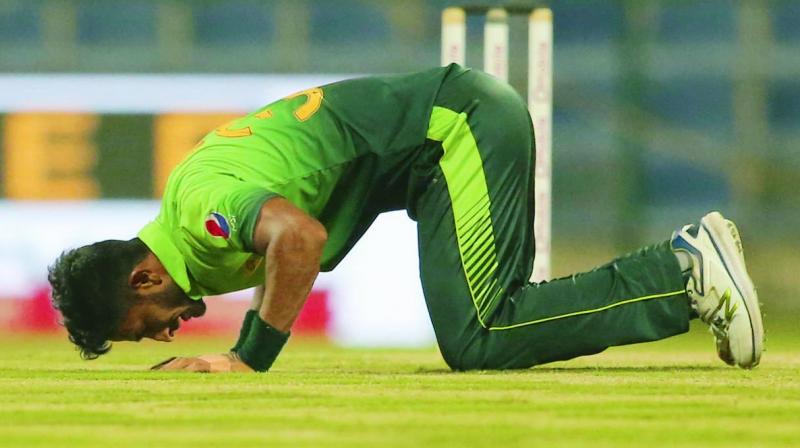 Abu Dhabi: Energetic seamer Hasan Ali became the quickest player to reach 50 one-day international wickets for Pakistan as Sri Lanka were dismissed for 208 in the third ODI at Abu Dhabi on Wednesday.

The 23-year-old took a career best 5/34 and was ably assisted by leg-spinner Shadab Khan (2-37) as Sri Lanka, who won the toss and batted, lost their last nine wickets for only 106 runs.

Sri Lanka skipper Upul Tharanga (61) and Niroshan Dickwella (18) put on 59 for the first wicket, but from 102/1 in the 26th over their innings was derailed by Pakistan’s bowlers.

Shadab, man-of-the-match for his 52 not out and 3/47 in the second game on Monday, had Dinesh Chandimal (19) leg-before and Tharanga caught in the deep. Tharanga, who hit a brilliant 112 not out in the previous match, hit five boundaries during his 80-ball knock.

Hasan, who had given Pakistan the early breakthrough with Dickwella’s wicket, removed Chamara Kapugedera (18), Milinda Siriwardana (two) and Jeffrey Vandersay (nought) to complete 50 wickets in his 24th ODI.

The previous record was held by legendary paceman Waqar Younis, who took 27 ODIs to reach the mark. Hasan’s previous best bowling figures were 5/38 against the West Indies in Guyana earlier this year. Lahiru Thirimanne (28) and Thisara Perera (38) took Sri Lanka past the 200 mark.