Sports   Cricket  19 Nov 2019  Ben Stokes reveals why he did not want Alex Hales to be in World Cup squad
Sports, Cricket

The left-handed southpaw has recently revealed that he didn’t wanted his teammate Alex Hales to be a part of England’s World Cup squad. 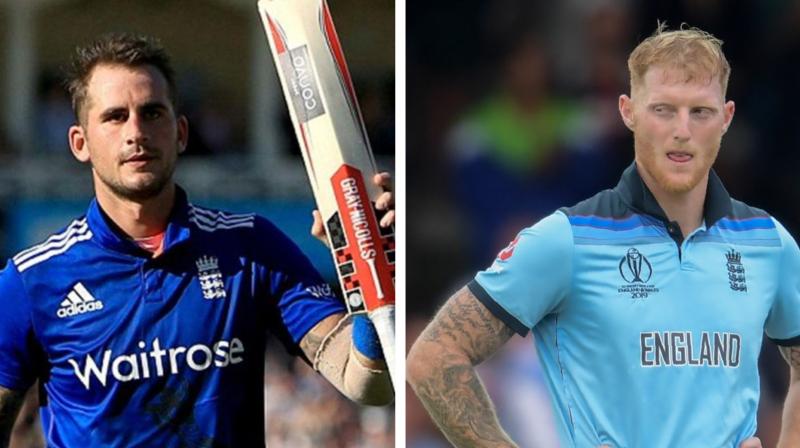 Despite not being able to regain the historic urn, the all-rounder helped England to level the series with a match winning knock of 135 at Leeds. Nevertheless, Ben Stokes has recently revealed that he didn’t wanted his teammate Alex Hales, who failed a drug test in April 2019, to be a part of England’s 15-member World Cup squad. (Photo:AFP)

Mumbai: During the English summer, Ben Stokes was at his phenomenal best as he led England to their maiden World Cup triumph in the 50-overs format. Following the World Cup success, the all-rounder also starred in England’s 2-2 Ashes series draw against their nemesis Australia.

Despite not being able to regain the historic urn, the all-rounder helped England to level the series with a match winning knock of 135 at Leeds. Nevertheless, the left-handed southpaw has recently revealed that he didn’t wanted his teammate Alex Hales, who failed a drug test in April 2019, to be a part of England’s 15-member World Cup squad.

On 26 April 2019, in a drug test, the explosive right-handed England opener was found positive, following which the England and Wales Cricket Board (ECB) had dropped Hales from the preliminary World squad, and banned him from all forms of the game, including the domestic circuit. And, till now, there has been no news on his returning date.

Speaking about Alex Hales, Stokes, in his recently launched book "On Fire” said it was imperative that the culture and environment the World Cup winning team had built be protected.

A report by Metro.co.uk said, Stokes in his book had written, "I went into all the details about my experience of what happened on the 2017-18 tour of Australia and posed the question as to whether Hales was the level of player that we could make an exception for."

Stokes also said, "In the end, it came down to us protecting the culture and environment we had built."

The hero of the 2019 World Cup final also revealed that when the ECB declared that it had banned Hales, England captain Eoin Morgan took the onus to take the views of senior players on the matter.

"Eoin made made it his business to seek out the senior players within the squad to canvas their views as to what should be done about Alex's situation," Stokes revealed.

However, when Morgan asked Stokes to give his opinion, the 28-year-old’s answer was a straight forward "no".

Stokes stated, "When asked directly what I would do, I came straight out with it: No. I can't have him in the squad."

During the 2019 World Cup, Ben Stokes amassed 435 runs at an average of 66.42, and also he scalped seven wickets. During the tense final against New Zealand, Stokes scored a match winning 84 to hand England their first World Cup title. Following his heroics, the New Zealand-born cricketer had given player of the match award. Moreover, he is also set to be conferred the Knighthood.