Karun's unbeaten 303 powered India to 759 in their first innings and helped them secure 282-run lead over England. 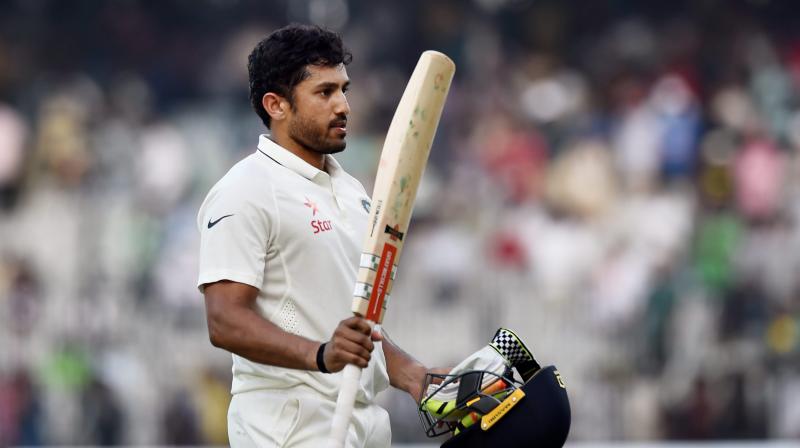 Karun Nair, who had previously never scored a century for India but batted through three sessions to frustrate England's bowlers. (Photo: PTI)

Right-hander Nair, who finished on 303 not out, reached the landmark with a boundary before India declared their first innings on a huge 759-7 for a lead of 282 in the fifth and final Test.

England ended the day on 12 without loss, with skipper Alastair Cook (three) and Keaton Jennings (nine) at the crease, and a day's play still to survive to secure a draw.

The day belonged to 25-year-old Nair, who had previously never scored a century for India but batted through three sessions to frustrate England's bowlers on a flat pitch.

Nair was playing in just the third Test match of his career. He recorded his maiden century in the morning session before expertly converting it into a double and then a triple in the evening.

He became only the third batsman to covert a maiden Test hundred into a triple century, joining the elite company of West Indies' Garry Sobers (365 not out) and Australia's Bob Simpson (311).

Nair's knock came off 381 balls and was laced with 32 fours and four sixes. He reached the feat with a cut shot off Adil Rashid and raised his helmet to a standing ovation.

The triple ton came a day after teammate Lokesh Rahul missed 200 by a single run after getting out to Rashid on 199 in the final moments of play on Sunday.

Nair, who started the day on 71, shared three hundred-plus partnerships with Rahul, Ravichandran Ashwin (67) and then Ravindra Jadeja (51).

His 181-run sixth-wicket partnership with Ashwin stood out as India registered their highest-ever innings score of 759, surpassing their 726 against Sri Lanka in December 2009.

Earlier in the day debutant England all-rounder Liam Dawson, who ended with two scalps, got his first Test wicket with his left-arm spin.

Dawson, who scored an unbeaten 66 in England's first innings, pinned Murali Vijay in front of his stumps and he was given out lbw.

India have already secured the series with a 3-0 lead.