Why is Virat Kohli so animated? Please ask him, says Kieron Pollard 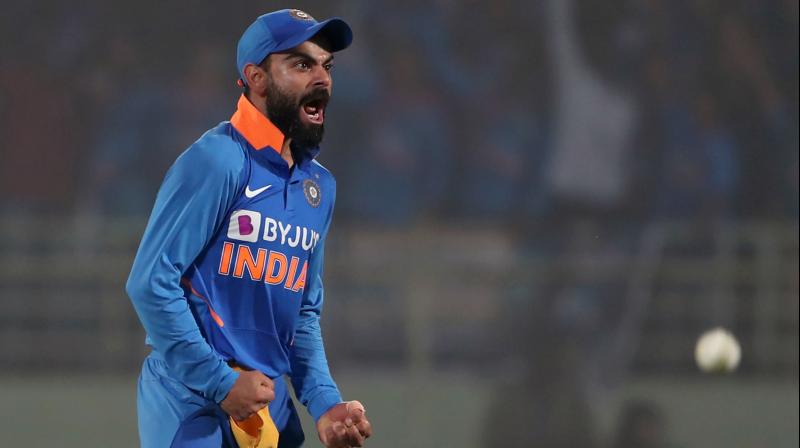 India skipper Virat Kohli has been a bit more charged up than he usually is during the ongoing West Indies series and rival captain Kieron Pollard is 'clueless' as to what's been the trigger. (Photo:AFP)

Visakhapatnam: India skipper Virat Kohli has been a bit more charged up than he usually is during the ongoing West Indies series and rival captain Kieron Pollard is "clueless" as to what's been the trigger.

During the T20I series, Kohli's imitation of Kesrick Williams' 'notebook tick' celebration was 'television gold', and then he seemed agitated when on-field umpire Shaun George referred Ravindra Jadeja's run-out in the first ODI in Chennai.

In fact, Kohli was very animated after Pollard's first-ball dismissal.

"You have to ask him why he is so animated. I can't answer that for you. It is what it is. You ask him that question and let him answer that. I don't know. I have no clue," Pollard replied with a wry smile.

In pursuit of 388, the West Indies were 192 for three in the 30th over, but lost five wickets for 18 runs to eventually lose the second ODI by 107 runs here on Wednesday.

But more than the middle order collapse, Pollard was concerned about the 120 plus runs conceded in the last 10 overs.

"We were in a good position and if you lose wickets frequently, you put yourself on the backfoot. That's where we faltered in the chase and we accept that," Pollard admitted.

"Chasing 388, guys had to go out and express themselves, rather than trying to get in. I thought, where the game changed was in last 10 overs (of Indian innings), we went for a 127 runs, that's where we lost the momentum in the entire game.

"Before that, it was neck and neck and we knew it was a good track. We haven't really executed in the back-end which has been really the storyline for us when there has been a flat track."

On the day, Rohit Sharma was dropped on 70 by Shimron Hetmyer but Pollard defended his team's catching, saying that the overall standard has been pretty good.

"For me, personally, fielding is an attitude. The intensity with which you go out on the field, your anticipation and awareness of what is taking place at that point in time. Both teams have been guilty of dropping catches and making some basic errors," observed one of the finest fielders in the game.

Pollard also wants the broadcasters to cut them some slack as showing their bloopers again and again doesn't really help.

"But overall throughout the ODIs and T20s, we have been pretty good. Standards have risen a bit, but we are human beings. We tend to make mistakes. I keep saying in conversations that our mistakes are broadcast so that people can have opinion on it."

Shai Hope, on Wednesday, pipped Virat Kohli and is only behind Rohit Sharma in the top ODI run-getters list for 2019, with a match left in the calendar year.

Pollard was not too worried about Hope's none-too-impressive strike rate of 75 as he knows what the keeper-opener brings to the table.

"Sometimes we get carried away by so many stats and so many datas that we don't give importance to how we build a team. You don't build a team with guys who only play shots. You got to have an anchor who would hold one end," Pollard defended his colleague.

"If you look at how we played cricket in past few years, we have been losing a lot of wickets early up and so you have to build a foundation. You can't build the top part of the house and then build the bottom. We have identified Shai as someone who opens the batting and has been phenomenal."

It's all about knowing the roles and responsibilities rather data crunching, which Pollard believes is the media's job.

"You go up and down and that's how you find a middle ground. It's work in progress for us and we don't want to get into details about that strike rate. We leave that to you guys to write about and we would enjoy reading the articles," he said.