Ben Stokes became the highest paid cricketer from the 2017 IPL auction, as Rising Pune Supergiants signed him up for Rs 14.5 crore. 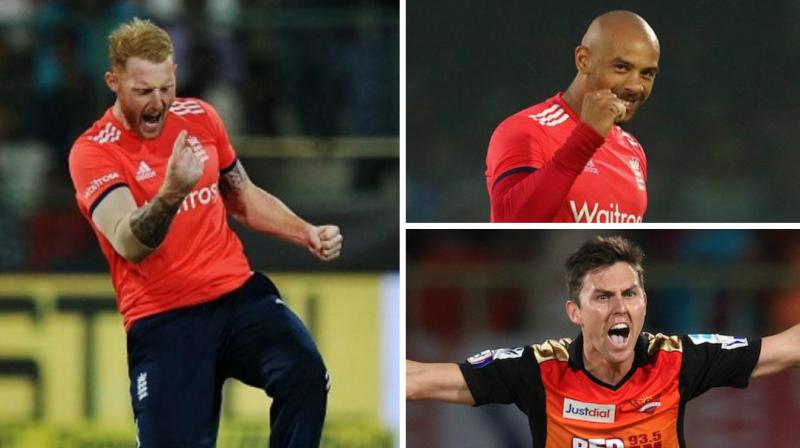 The IPL auction 2017 has gone on at a brisk pace, with Ben Stokes becoming the highest paid player of the year. (Photo: BCCI/ AFP)

Bengaluru: Rising Pune Supergiants made history at the 2017 Indian Premier League auction in Bangalore on Monday, as they signed England all-rounder for a whopping Rs 14.5 crore, making him the highest-paid foreign player in the tournament.

In another historic moment, Mohammad Nabi became the first player from Afghanistan to be drafted into the IPL. He was signed by Sunrisers Hyderabad for Rs 30 lakh.

However, there were a few big names, who were not picked up by any of the teams in the auction. World no. 1 ODI and T20I bowler, South Africa's Imran Tahir shockingly went unsold in the auction.

Here is the list of players bought by the respective teams in the 2017 IPL auction. 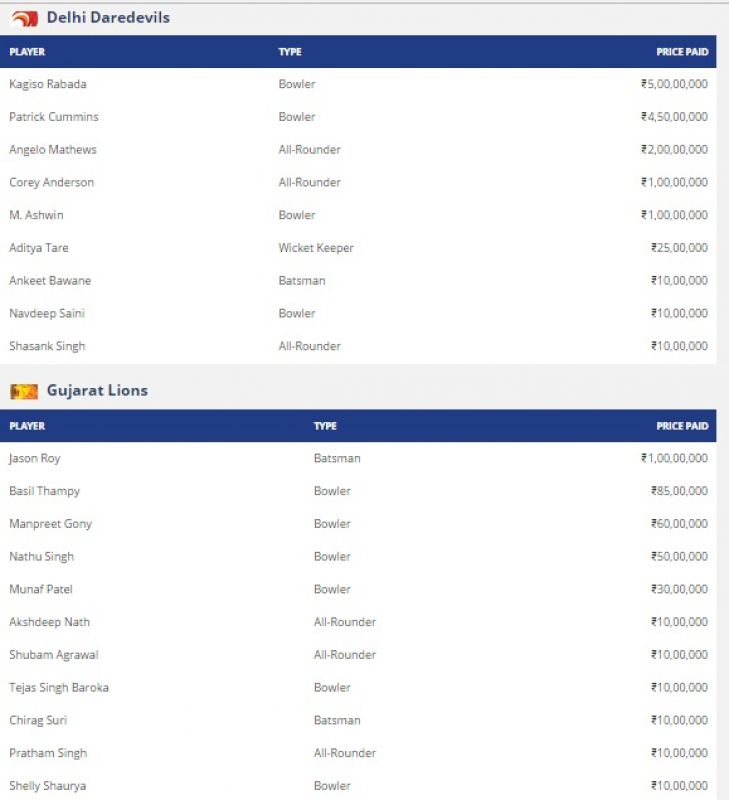 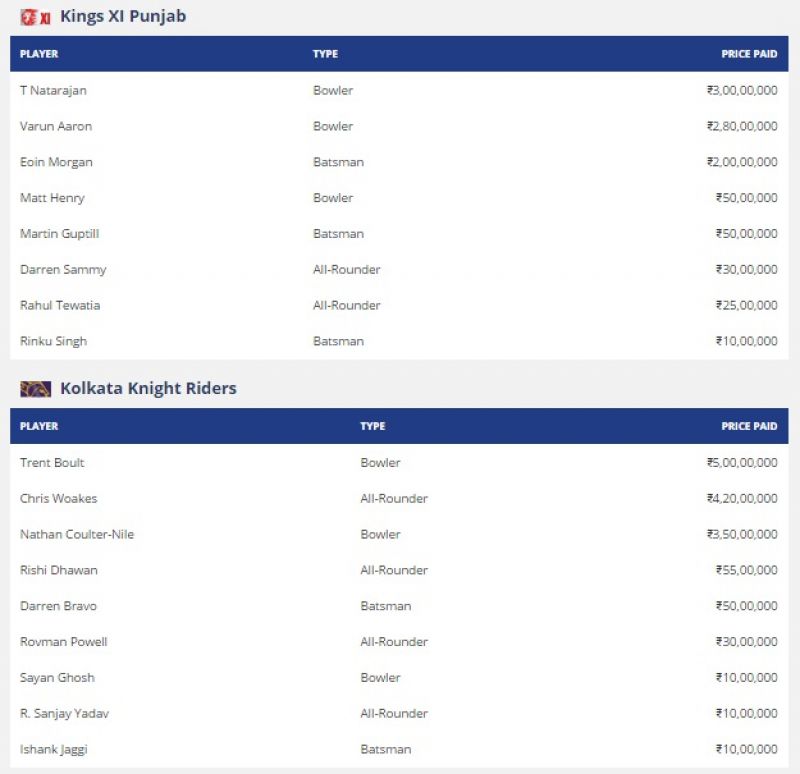 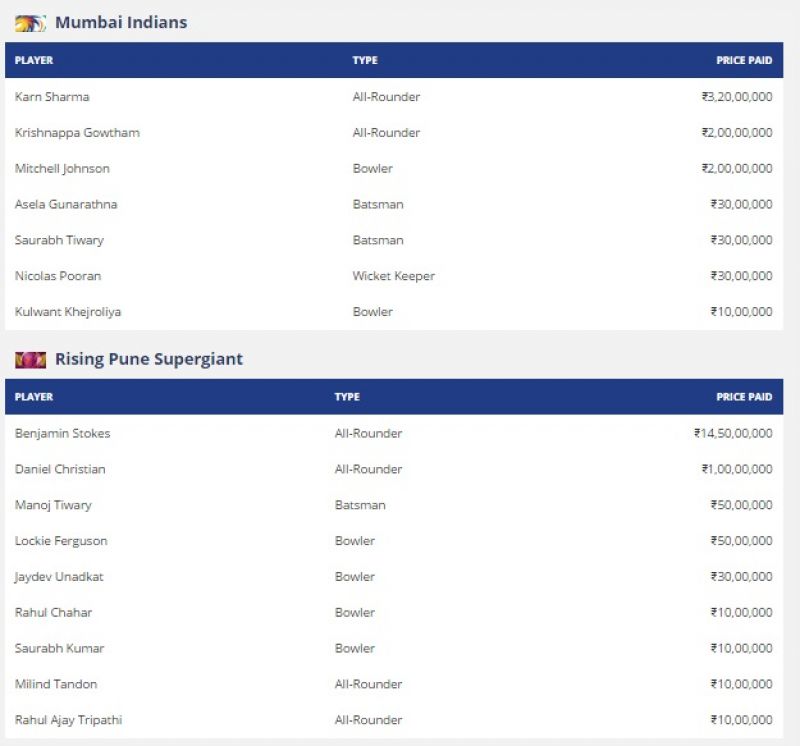 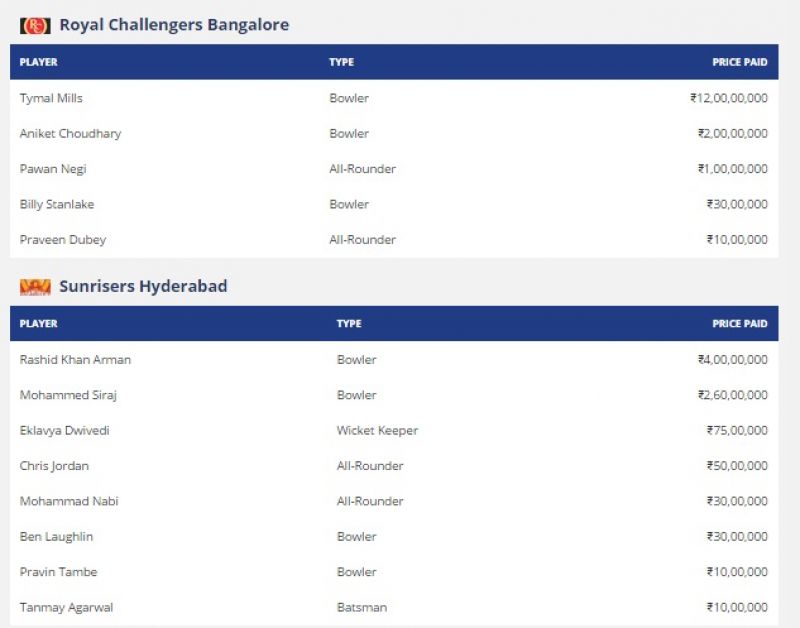 Ben Stokes and Tymal Mills are the top buys so far, while Trent Boult is the third highest from the 2017 IPL auction.

Kings XI Punjab (Rs 13.9 crore) have the biggest purse now, as we get set go back to the unsold players from the afternoon session of the IPL auction.

Mohammed Siraj has been snapped-up by Sunrisers for Rs 2.6 crore.

Ishant Sharma goes unsold. The star Indian pacer is set not to play in 2017 IPL.

Kyle Abbott becomes the second big name to be unsold in the afternoon session.

Irfan Pathan goes unsold again! This is a huge surprise.

Kings XI get a cheap buy, as they sign Guptill for Rs 50 lakh.

And we are back at the IPL auction, as Martin Guptill goes under the hammer again.

Ben Stokes and Tymal Mills still remain the top buys so far, while Trent Boult is the third highest from the 2017 IPL auction.

Sunrisers Hyderabad have the biggest purse now, as we get set go back to the unsold players from the morning session of the IPL auction.

Gujarat Lions get the pacer they wanted, as they overcome stiff challenge from KKR to sign Manpreet Gony.

Varun Aaron up next.

That's the end of that set. Now for the wicketkeepers.

After a competitive round of bidding against their neighbours Gujarat, Mumbai Indians sign Karan Sharma for Rs 3.2 crore.

The next set is for the all-rounders.

This is a biggie! Marlon Samuels goes unsold.

Pravin Tambe gets picked off cheaply at Rs 10 lakh by sunrisers Hyderabad.

Afghanistan spinner Rashid Khan gets picked up by Sunrisers Hyderabad for Rs 4 crore after a fierce round of bidding between Mumbai and Hyderabad.

Delhi Daredevils and Sunrisers Hyderabad in a steep bidding war. the former emerge winners in the end as they sign M Ashwin for Rs 1 crore.

Gujarat Lions are stepping up the pace. They overcome bids from Sunriserst to sign Basil Thampy for Rs 85 lakh.

RCB snap up Aniket Choudhary for a whopping Rs 2 crore after a long round of bids.

K Gowtham, who scored a century against Australia in the three-day warm-up game at the Brabourne Stadium, gets snapped-up by Mumbai Indians for Rs 2 crore.

Mohammad Nabi becomes the first Afghan player to be signed by an IPL franchise. Gets snapped-up for Rs 30 lakh by Sunrisers.

Ben Stokes is still the biggest buy of the 2017 IPL auction, after the second phase. There was a brief moment when it looked like Stokes' compatriot Tymal Mills would overtake him, untile bids for the pacer stopped with RCB snapping him up for Rs 12 crore.

And that brings to the end of the second phase of the 2017 IPL auction. Kings XI Punjab still have a massive purse of Rs 21.35 crore. Here's all the teams and the amount of funds they have remaining.

World no. 1 ODI bowler Imran Tahir goes fails to find a bidder, even at the base price of Rs 50 lakh.

The spinner's section is up next.

SHOCKING! Ishant Sharma has no takers. He goes unsold.

After a tense round of bidding, Tymal Mills, Royal Challengers Banglaore snap-up the Englishman for a whopping Rs 12 crore.

And Delhi Daredevils snap him up after a bidding war with Hyderabad.

Mumbai Indians get a cheap buy as they snap up Nicholas Pooran for Rs 30 lakh.

Kings XI Punjab still lead the list of the franchise with the biggest remaining purse after the end of the first phase of the IPL auction.

Five players have been sold so far in the 2017 IPL Auction. Here's the list. 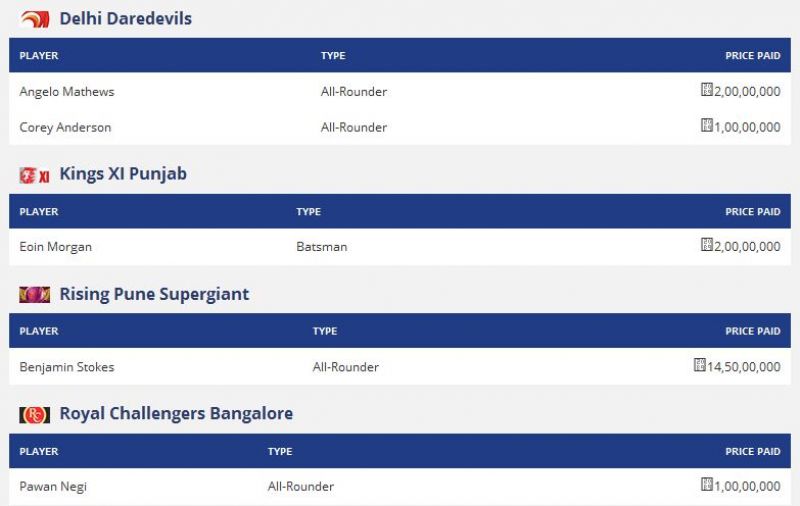 Things have cooled down a bit now, Delhi Daredevils snap-up Corey Anderson with an opening bid of Rs 1 crore. Sean Abbott  and Chris Jordan goes unsold after this.

The England all-rounder has certainly 'Stoked' half the teams in the tournament. Mumbai, Delhi, Hyderabad and Pune all went into a bidding war for the Englishman. The Rising Pune Supergiants finally swwop in with Rs 14.5 crore.

And we have the first real bidding war of the day! After a long round of bidding war against Sunrisers Hyderabad, RCB snap-up Pawan Negi for Rs 1 crore.

England captain Eoin Morgan becomes the first player to be sold, as Kings XI Punjab whip him off for Rs 2 crores.

Kings XI Punjab, who are yet win the tournament, start with the strongest purse in the IPL auction – Rs 23.35 crore. They are closely followed by Delhi Daredevils (Rs 21.5 crore and Sunrisers Hyderabad (Rs 20.9 crore).

Meanwhile, Royal Challengers Bangalore (Rs 12.825 crore) and Mumbai Indians (Rs 11.555 crore) have the smallest purse among all the teams.

A total of 351 players from all over the world are set to go under the hammer on Monday.