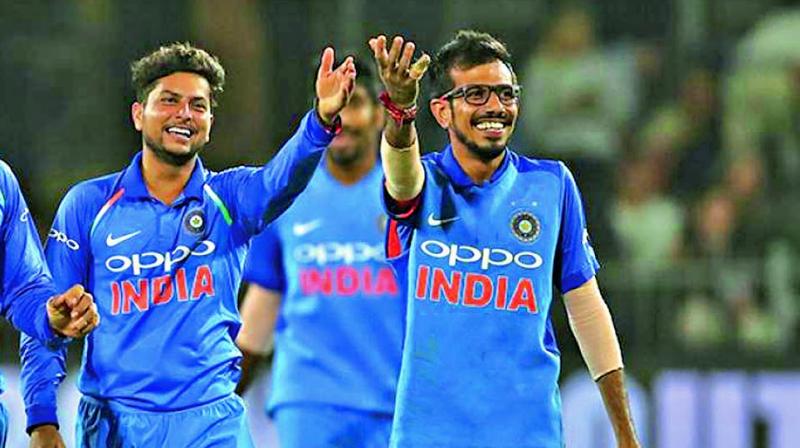 Johannesburg: Former South Africa chinaman bowler Paul Adams believes that India are in a “unique position” in world cricket with the wrist spin duo of Kuldeep Yadav and Yuzvendra Chahal in their limited-overs’ playing XI.

With the ODI/T20 strategy moving towards wrist spin, Adams believes India are in an advantageous position if they can keep playing the duo regularly.

“If you look at the way cricket has gone in recent times, it has become more in favour of batsmen. So it is great for India that they are able to include both in the same playing eleven,” Adams said.

“Yes, they are wrist spinners but they are different. They can take the ball away from batsmen. With different angles and different deliveries, they are very potent.”

With his complex action, Adams made quite a flutter when he burst into international cricket in the mid 90s.

“India are eager to use both together and their team balance even allows for it. Not a lot of teams can do that include two spinners in the same ODI eleven, let alone two wrist spinners.

“South Africa usually dont use two spinners in ODIs or T20Is. At Johannesburg ODI, they didnt have a single spinner on a good batting surface. Yet, India were able to play both. It is definitely a unique position to be in.”

Chahal and Yadav came into prominence in August when India made a strategic shift to leg spin, keeping the 2019 ODI World Cup in mind.

What started as an experimental move to evaluate spin options has now gained permanence as R Ashwin and Ravindra Jadeja continue to be excluded from Indias limited-overs plans.

Adams believed that the two wrist spinners have an advantage over their more illustrious colleagues as he dissected the wrist spin duos bowling.

“Their success is down to slow pace. Yes, they havent played in South Africa before but they saw the pitches here and knew that they had to bowl at a slower pace.

“They were put under pressure in only one match but it was down to conditions. The pitch was good for batting and they were attacked. But leave that game aside, they have been nearly unplayable,” said Adams.

Going into the specifics, Adams felt the ability to take the ball away from batsmen adds to their potency.

“Chahal has a lot of consistency. He gives a lot of rotation to the ball, which is good. Yadavs googly is very bothersome for the batsmen and not easy to read.

“The other thing that has worked from them is that they can take the ball away from batsmen.

Irrespective of who bowls it, pacers or spinners, the ball going away has always been a wicket-taker in cricket. “Someone like Ashwin has a lot of variations and I hear he is even developing some traits of leg spin. But these wrist spinners can move the ball naturally in both directions and that is more potent,” he explained further.

Adams was himself a left arm unorthodox wrist spinner and Yadav is in the same mould. he said Chahal could become and even greater threat.