India vs Australia, 3rd Test: Gritty Australia eek out a draw in Ranchi

Fifties from Peter Handscomb, Shaun Marsh helped did not allow India to take 2-1 lead in the series. 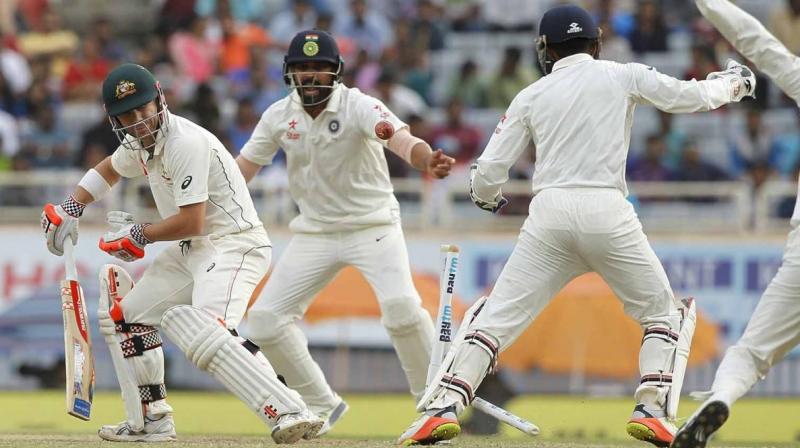 India are on the front foot, and will be looking to bowl the Aussies on day five of the Ranchi Test. (Photo: BCCI)

Ranchi: Gritty half-centuries from Peter Handscomb and Shaun Marsh enabled Australia to hold out for a draw in the third Test against India Monday, leaving the four-match series tantalisingly poised at 1-1.

Australia, who began their second innings 152 runs adrift of the hosts, were in deep trouble after being reduced to 63-4 in Ranchi before Handscomb (72 not out) and Marsh (53) put on 124 for the fifth wicket.

The tourists eventually reached 204 for 6 at stumps on the fifth and final day, after the hosts made a mammoth 603-9 declared in their first innings.

Australia were 83 for four in their second innings at lunch on the fifth and final day of the third Test against India in Ranchi on Monday.

Shaun Marsh was on 15 and Peter Handscomb on four at the break with the visitors needing another 69 runs to avoid an innings defeat.

With Ravindra Jadeja already having taken two wickets overnight, India will be looking to pick up the remaining eight Australian wickets, before the visitors level the scores at the Jharkhand Cricket Association Stadium, in Ranchi, on Monday.

Both India and Australia have been at par with each other, with the latter winning the first Test in Pune by a mammoth 333-run margin, while the hosts completed a memorable comeback in to clinch the second Test by 75 runs.

The Aussies did get off to a good start in the third Test, putting up a challenging 451 on the board in their first innings.

India however, with the help of stellar knocks from Cheteshwar Pujara (202), Wriddhiman Saha (117), and Murali Vijay (82), put themselves right back in contention, amassing a total of 603 for nine; they lead by 152, when skipper Virat Kohli decided to declare their innings.

Now, the Aussies have been left with the unenviable task of batting through the fifth day of the Test, where the pitch seems to be increasingly favouring the spinners.

India had declared their innings with eight overs to spare on Sunday, hoping to get the wickets of a few tired-Aussie batsmen. That is exactly what happened, when World No. 1 Test bowler Jadeja spun his magic to dismiss opener David Warner and night watchman Nathan Lyon.