CSK will get to 16 points with a win at the Chinnaswamy and it should be enough to guarantee a place in the top-four. 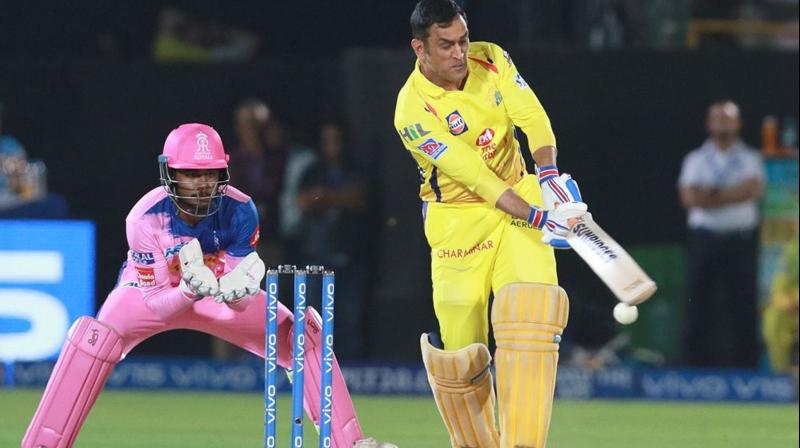 CSK skipper M S Dhoni missed the game against SRH due to a stiff back but will probably be fit for the game on Sunday. (Photo: BCCI)

Bengaluru: Chennai Super Kings will be expected to shrug off a rare loss and effectively seal a play-off berth against Royal Challengers Bangalore in the Indian Premier League here on Sunday.

Defending champions CSK, who lost to SRH in the previous game for only their second loss this season, will get to 16 points with a win at the Chinnaswamy and it should be enough to guarantee a place in the top-four.

Their leader M S Dhoni missed the game against SRH due to a stiff back but will probably be fit for the game on Sunday.

"Probably he will play in the next game against RCB," stand-in skipper Suresh Raina had said after the loss to SRH.

Following the tournament opener between CSK and RCB in Chennai, both teams have had contrasting campaigns. While CSK have lived up to their reputation again, RCB continue to under-perform.

No doubt, RCB will be fired up after the win against KKR at Kolkata on Friday night when they finally managed to defend despite a brutal assault from Andre Russell and Nitish Rana. It was only their second win in nine games in the season so far though they it still kept them mathematically alive in the tournament.

RCB could also take a cue from a similar situation in 2016 when they had lost five of their first seven games, but ended up in the playoffs after winning six of their last seven matches.

In the absence of indisposed AB de Villiers on Friday, Virat Kohli took it all upon himself to post a big total and in the process scored his first century of the season. With AB expected to be back, RCB will be aiming to please their loyal fans with a victory at last on their home ground.

Despite the arrival of Dale Steyn, their bowling remains a worry as it was evident at the Eden Gardens where Russell and Rana almost pulled off the impossible after KKR needed 113 off the last six overs.

The hosts just fell short by 10 runs as Moeen Ali saved the day for RCB with both bat and ball, having defended 24 in the final over.

On the the other hand, CSK will fancy themselves against RCB and sail into the play-offs. Dhoni, who has scored 230 runs in eight games including two half-centuries, will hold the key once again.

The star bowler for CSK this season has been 40-year-old Imran Tahir, who has taken 13 wickets. The South African import has executed his skipper's plans brilliantly.