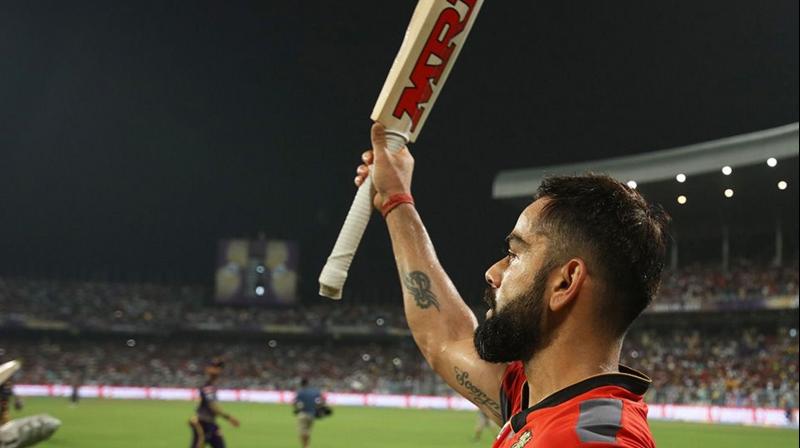 RCB are currently sitting at the bottom of the table, with just two wins from nine matches. (Photo: BCCI)

As per an article by Sportskeeda, Royal Challengers Bangalore registered their second win in IPL 2019 which was shaped by Virat Kohli.

Kohli’s ton paved the way for RCB to post a staggering total of 213 on the scoreboard. Kohli scored 100 runs in 58 balls, comprising 9 fours and 4 sixes.

KKR decided to field after winning the toss at Eden Gardens. RCB kicked off with a shaky start, as Parthiv Patel and Akshdeep Nath departed early.

It was Moeen Ali who was a game-changer scoring 66 runs in 28 balls, smashing 6 sixes and 5 fours in his innings.

Kohli, on the other end supported Ali till his departure. However, Kohli accelerated afterwards and smashed the fifth ton of his IPL career in just 58 balls.

RCB are currently sitting at the bottom of the table, with just two wins from nine matches. But RCB fans certainly had a delightful experience yesterday, thanks to the scintillating display of batting by Ali and Kohli.

Of course, Twitter was in awe after Kohli’s century, considering the crisis through which RCB is going through currently. Here are some of the tweets hailing the skipper.

Sensational 100. The acceleration from Kohli has been awesome. Moeen set up the carnage and Kohli sealed it dramatically

Virat Kohli becomes only the second player to score five centuries for the same team in IPL history..

The #King is back where he belongs. His first century this #IPL2019 and 5th career #IPL century. A shaky start, lady luck smiled on him and then he took off in style.. 👌🌟👏 #Kohli #ViratKohli @imVkohli#RCB score a grt 213-4. Fantastic! #KKRvRCB

Most centuries in Twenty20 cricket as captain:

That Virat Kohli cover drive alone was worth the price of admission to the Eden Gardens today. This will be a fabulous contest!

Those aggressive celebrations are back happy tears for many fans#KKRvRCB pic.twitter.com/2kZlZU2Ud4