Harmanpreet Kaur took the Australian bowlers to the cleaners despite India losing Mandhana and Raut early on. 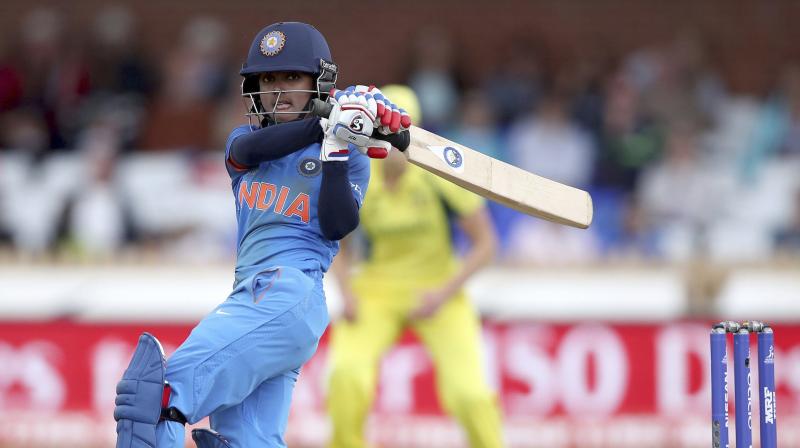 Harmanpreet seems to have some trouble in her knee, as she has been limping often during runs but smacks two biggies in the final over. She along with Veda Krishnamurthy steer India to a glorious 282 in 42 overs, courtesy of her brilliance alone. She is greeted with hugs and kisses by her teammates as she returns back to the pavillion, and they know it's a great total. Will this prove be too much for the Australians?

Deepti has her off-stump cleaned up after mistiming her sweep shot, but it does not affect Harmanpreet who gets to 150 runs. What an innings this! Not a fancy celebration for Kaur as she's not done yet.

Ashleigh Gardner who had an economy of less than 3 runs-per-over is taken to the cleaners by Harmanpreet Kaur. Gardner is creamed for 2 fours and 2 sixes, conceding 24 in the 37th over. Meanwhile Harmanpreet is on a roll, with Deepti playing a supportive role.

What a time to score your 2nd World Cup century for Harmanpreet Kaur. There is a mix-up between Deepti and Harmanpreet for the 3rd run, but Deepti gets back in time at the non-strikers crease. Harmanpreet lashes out at her partner over the error, but it's a century without celebrations. Deepti is in tears. Look how much it means to them!

Another lusty blow for Harmanpreet Kaur to bring up her 50. Times have been tough and she has remained tougher. Well deserved and much needed for the team!

India have lost Mithali when they needed her. The Indian captain moves on the back foot trying to play it square towards third man, but the delivery by Beams is a bit faster and skids on to her stumps. Deepti Sharma walks in at no.5!

The sun is up and so is India's momentum. Aussie spinners Jeff Jonassen & Kristen Beams have kept their angles tight, but Kaur and Mithali have approached them in a clever way sticking more towards the off stump. Harmanpreet Kaur is wreaking havoc amongst the bowlers and her presence will be crucial to India.

Not the start India would have accepted, but they'll take that for now. Two graceful off-drives from Harmanpreet Kaur get India to the 50 mark.

Just when she was changing gears, Punam Raut has fallen victim to a cheap dismissal. Mithali Raj played some good strokes round the park, but Punam Raut's dismissal will hurt team India a lot. Harmanpreet Kaur arrives at the crease, can she with Raj steer India to a satisfactory total?

A decent start from India after losing Mandhana early on. Punam Raut has been at the forefront of India's comeback, punishing the bad deliveries. Meanwhile, India captain Mithali Raj is taking her time to settle, playing on her favoured offside. Schutt conceded 11 runs in the 5th over, which should be a big boost for India.

Toss to happen in less than half an hour. The match has been reduced to 42 overs per innings.

Match reduced to 42 overs per side #WWC17 #AUSvIND

The covers have finally come off as the rain stops. An inspection by the umpires will be held soon.

The outfield covers come off. There could be an inspection by the umpires soon.

The outfield covers are coming off, the umpires are poised to inspect, just a little bit wet but nothing a super-sopper won't fix! #WWC17 pic.twitter.com/z0X3gbUcFD

The toss has been delayed, as the covers are still on.

Unfortunately the coin toss has been delayed in Derby...

Not so good news, ahead of the much-awaited semifinal. It is raining heavily, and the covers are on.

Derby: The Indian women’s cricket team, led by captain Mithali Raj, will look to knock-out defending champions Australia when the two teams face-off in the second semifinal of the ICC Women’s World Cup here on Thursday.

India, who finished runners-up in the 2005 edition, had a smooth start to the tournament after winning their first four matches, but lost the next couple of matches to South Africa and Australia.

India’s place in the semifinal was then confirmed after a 186-run win over New Zealand in a virtual knockout game, courtesy a 109 from Mithali Raj, 70 from Veda Krishnamurthy and a match-winning 5 wicket spell from Rajeshwari Gayakwad.

Mithali Raj has led from the front for Team India, scoring three half centuries, and also a century against the Kiwis in the previous match. Also, it was in the previous encounter between these two sides when the 34-year old became the leading female run-scorer in One Day Internationals, surpassing Charlotte Edwards of England.

However, India went on to lose the game by eight wickets.

Australia, meanwhile, is in sublime form and would hope to enter their ninth World Cup final. The Southern Stars has had a tournament to remember so far, after just losing one match, to hosts England.

For Australia, too, captain Meg Lanning has been the player to watch out. Lanning has stepped in for the team at all times, and her unbeaten 152 against Sri Lanka was an unforgettable innings.

The six time world champions, chasing a record seventh title, will once again face arch-rivals England at Lords on Sunday, if they overcome the Indian hurdle.

India, though, have not won the World Cup, and will kook to do so as a fresh challenge awaits them.