New Zealand’s only warm-up game was badly affected by torrential rain and the Black Caps went into the match in Galle a little underdone. 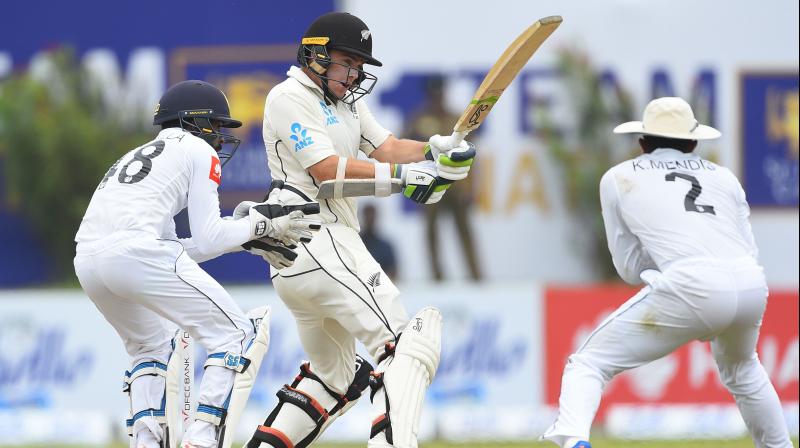 Tom Latham tries to play a shot during the third day of the opening Test cricket match between Sri Lanka and New Zealand. (Photo:AFP)

Colombo: New Zealand’s loss in the first test against Sri Lanka had been a lot closer than the six-wicket defeat suggested and the side had learned a lot about how best to play in local conditions, according to pace bowler Tim Southee.

New Zealand’s only warm-up game was badly affected by torrential rain and the Black Caps went into the match in Galle a little underdone.

Despite that, Southee felt his side had been competitive throughout and it was really only a century-stand between captain Dimuth Karunaratne (122) and Lahiru Thirimanne (64) as they chased 268 for victory that separated the two sides.

“We played some good cricket throughout the five days but Sri Lanka were just better in the back end of the game,” said Southee, who was confirmed on Tuesday as the captain for the Twenty20 series following the second test in Colombo.

“We showed glimpses throughout and the guys learned a lot from playing in these conditions.

“Hopefully we can put in the hard work and turn out a performance over the next test match.”

Southee and his fellow pace bowler Trent Boult, who will miss the three-match T20 series along with regular captain Kane Williamson, were barely used on an unresponsive Galle pitch.

The spin trio of Ajaz Patel, Will Somerville and Mitchell Santner combined for 128 of the 179 overs bowled by New Zealand in the match.

Southee bowled just seven overs in the first innings and 12 in the second.

“It’s a tough one because you know that you’re only going to get a short spell, so you walk a fine line of not trying too much and trying to keep it tight but still trying to take a wicket,” the 30-year-old added.

“I guess we’re doing more of a support role for the spinners who are more attacking in these conditions.”

New Zealand’s top-six batsmen failed to truly fire in the first test with only Ross Taylor, who scored 86 in the first innings, and wicketkeeper BJ Watling (77 in the second), posting substantial scores.

The fact the visitors set Sri Lanka a target at all was due to the tail wagging in their second innings, with Somerville scoring a career-best 40 not out, while Southee (23) and Boult (26) chimed in with handy cameos.

“The tail did a great job to get a competitive score in the third innings,” Southee said. “If you look around the world the good sides do have contributions from the tail.

“When you have a batsman like BJ who bats so well with the tail then its about hanging in and trying to support him in the job he does.

“If you’re able to leak out as many runs as possible then that makes it tougher for the opposition.”

The second test starts in Colombo on Thursday with Santner under the most pressure to hold his place and he could be replaced by leg spinner Todd Astle or all-rounder Colin de Grandhomme.