The dashing opener scores 98 to set up nine-wicket win over Baroda in the Vijay Hazare Trophy opening match. 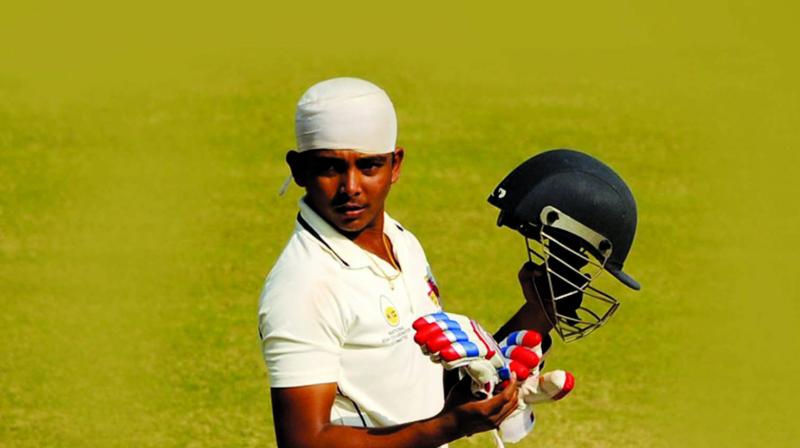 Prithvi Shaw scored a belligerent 98 in 66 balls to ensure Mumbai cruise to nine-wicket win over Baroda in the opening encounter of the Vijay Hazare Trophy at Alur Cricket Stadium-II in Bengaluru on Wednesday. Skipper Ajinkya Rahane (79 not out) and Shreyas Iyer (56 not out) also struck half-centuries in an easy chase achieved with 8.3 overs to spare.

Shaw and Rahane who were part of Indian Test squad in England and just returned home, opened the innings together. They gave Mumbai a blazing start with Shaw being the aggressor and hammering 12 boundaries and five sixes. Left arm spinner Krunal Pandya who starred with the bat earlier, broke the opening partnership of 137 in the 20th over with Rahane’s contribution being just 35.

Shaw fell just two runs short of what could have been his first limited overs hundred for Mumbai. He has already two hundreds to his name in List A cricket this year while representing India A.

Rahane in company of vice-captain Iyer went on with their business to take Mumbai home with undefeated second wicket stand of 102 runs.

Bowlers had earlier done decent job for Mumbai as Baroda batsmen couldn’t make a big score despite a good start. Kulkarni’s turned the things with his all wickets coming in the death overs. All-rounder Krunal was the top scorer for Baroda with 85 in 111 balls that included eight boundaries and a six. The No. 3 batsman was dismissed in the 43rd over by his Mumbai Indians team-mate Siddhesh Lad.

Pandya had steadied the ship with opener Kedar Devdhar (39) after Tushar Deshpande struck in his first over to remove Aditya Waghmode. Krunal and Kedar shared 52 runs for the second wicket before wicketkeeper Aditya Tare ran Kedar out. Gohil and Shams Mulani struck in the mid overs but Krunal found able partner in Yusuf Pathan to stitch another 70 runs for the fifth wicket in quick time.

But Kukarni’s spell starting with scalp of Yusuf changed the complexion of the match as Baroda tail couldn’t wag despite some resistance from Pinal Shah. Kulkarni dismissed Yusuf Pathan in the 39th over after he made 45-ball 40. He then removed Rishi Arothe in his penultimate over before accounting for Babashafi Pathan and wicket-keeper batsman Pinal (32) in the last over. Shams Mulani took three catches in the field.