Saka, 18, claimed his first senior goal on Thursday as Arsenal scored twice late on after Joe Willock gave the Gunners a 1st-half lead. 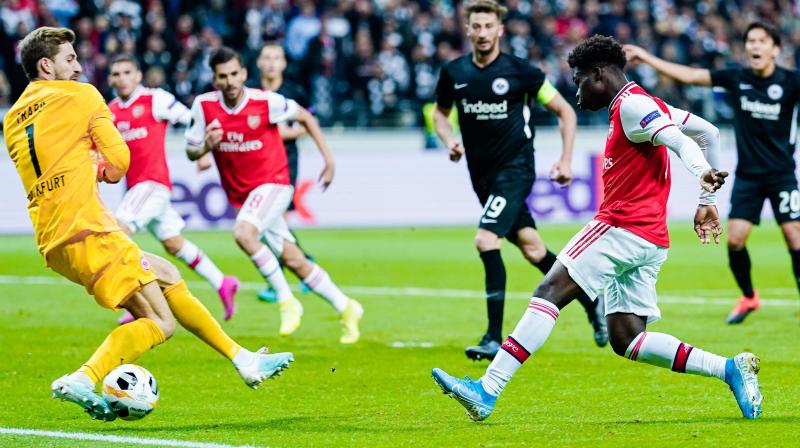 Tenage winger Bukayo Saka said it was a 'dream come true' to score his first goal for Arsenal in their 3-0 victory away to Eintracht Frankfurt in the Europa League. (Photo:AFP)

Frankfurt Am Main: Teenage winger Bukayo Saka said it was a "dream come true" to score his first goal for Arsenal in their 3-0 victory away to Eintracht Frankfurt in the Europa League.

Saka, 18, claimed his first senior goal on Thursday as Arsenal scored twice late on after Joe Willock gave the Gunners a first-half lead in Germany.

Saka showed great composure to score Arsenal's second goal on 85 minutes shortly after Frankfurt were reduced to 10 men when midfielder Dominik Kohr was sent off for a second yellow card.

He then set up Pierre-Emerick Aubameyang for the Gunners' third goal after audaciously robbing Frankfurt captain David Abraham just before the final whistle.

"I'm so happy to score for Arsenal, it's a dream come true - I have been dreaming of this moment since I was a kid," said Saka, making only his second Europa League start.

"I just want to keep working hard to make sure I can feel this feeling again."

Emery praised his young side as Saka and Willock, 20, seized their chances to impress, but warned Aston Villa will demand more in the Premier League on Sunday.

"We know tonight was going to be difficult, they fell back very deep and caused us problems early on," said Emery.

"We recovered the ball well and the young players showed the confidence to take their chances.

"Everybody can be happy and continuing in this competition is important, so it was good to get a good win, especially away from home."

"We analysed the team (Frankfurt) and they are very offensive, their fullbacks play like wingers, but we pressed well against them," said the Spaniard.

"These nights are important for us, sometimes we are going to use different players, tonight they imposed a lot on us.

"We were strong in the pressing, but Aston Villa will be a different and will ask a lot of us defensively. We have players for different moments."