Rohit's innings emulated that of Virender Sehwag's as he went on to reach the score of 200 after hitting a beautiful six. 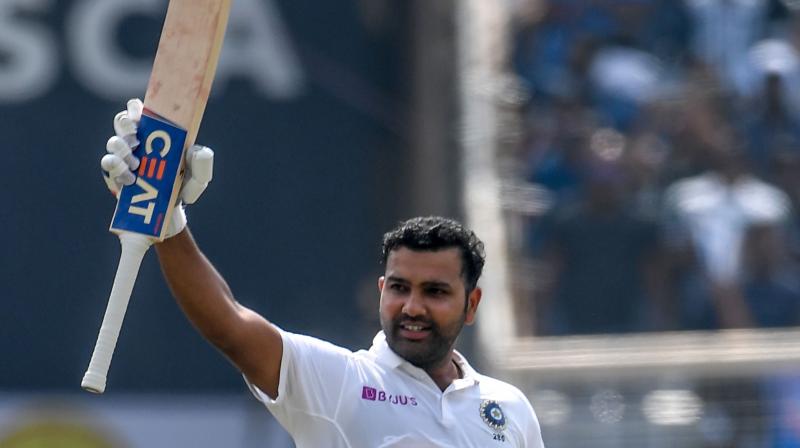 Rohit Sharma scored 212 runs in 255 deliveries before falling to a Kagiso Rabada-short ball and finding Lungi Ngidi on the boundary line. (Photo: AFP)

Mumbai: Rohit Sharma was at his belligerent best as he managed to wreak havoc on the South African bowlers. He reached the 200-mark in just 249 deliveries. His innings emulated that of Virender Sehwag's as he went on to reach the score of 200 after hitting a beautiful six.

Rohit Sharma scored 212 runs in 255 deliveries before falling to a Kagiso Rabada-short ball and finding Lungi Ngidi on the boundary line. He managed to hit 24 fours and 6 sixes.

Rohit Sharma also became the first batsman to score 500-plus runs in a Test series against South Africa. The previous best was Mohammad Azharuddin's 388 runs in 1996/97.

On Day 1, Rohit also set the world record for scoring the most number of sixes in a Test series overtaking Shimron Hetmyer.

Rohit, who has three double hundreds in the ODI format, batted with nonchalance to reach his second 150-plus score in the series and third overall.

The Indian opener also had luck on his side as an inside edge off Kagiso Rabada missed the stumps narrowly while he closed in on a double in the last over before the lunch break.

India had a fruitful first session, scoring 133 runs in 27 overs at a brisk rate of 4.92, with Rohit accumulating 82 of those.

Rahane looked fluent in his 115 off 192 balls, the innings studded with 17 fours and one six.

The Mumbai duo of Rohit and Rahane spent over four hours in the middle in a record 267-run fourth-wicket partnership. The healthy run rate meant India were not affected much by Saturday's rain interruption that forced stumps after only 58 overs.

Having dropped Rahane on 105, Heinrich Klaasen made amends by taking a good catch and give debutant George Linde his maiden Test scalp.

A glorious cover drive off Anrich Nortje set the tone for Rahane this morning as he collected three boundaries to enter the 90s before slowing down.

In between, Rahane was tested by Nortje with a bouncer and one sharp incoming delivery that struck him on his pad. But the Indians were never really troubled for a sustained period by the visitors.

The duo scored at a brisk pace, accumulating 60 runs in the first hour's play in 14 overs.