Nair's unbeaten 303 helped India to register their highest total in Tests as they declared their first innings at 759/7 against England. 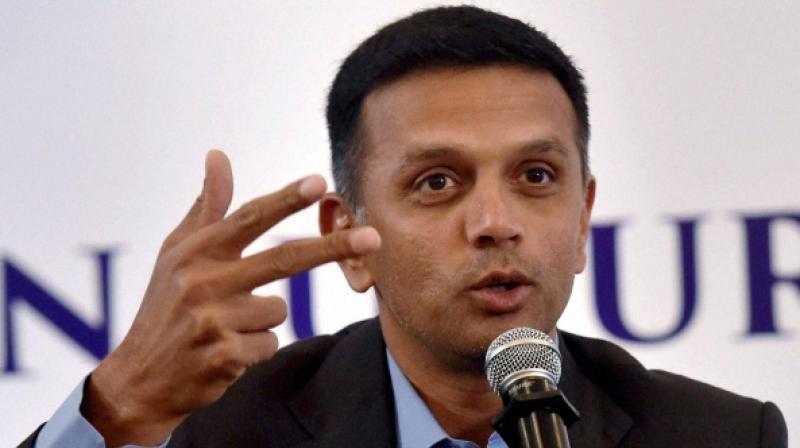 New Delhi: Board of Control for Cricket in India (BCCI) president Anurag Thakur on Monday credited Rahul Dravid, India's Under 19 coach, for nurturing and 'well grooming' the youngsters through his valuable tips and vast cricketing experience.

Nair's unbeaten 303 helped India to register their highest total in Test cricket as they declared their first innings at 759/7 on Day 4 of the fifth and final Test against England being played at the MA Chidambaram Stadium in Chennai.

"I congratulate Team India for this extraordinary performance. Young Karun Nair in his third innings, at the age of 25, has scored a triple century which is a big-big achievement. Heartiest congratulations to him," said Thakur to ANI.

"It is the hard work which has been put by the cricketers. But much credit goes to Rahul Dravid, who has been bestowed the responsibility of nurturing them at under 19 level and India A sides, which gives them a platform to do well at that level and when they come to play at the senior level, they try and give their best. So, I think they are groomed well under Rahul Dravid," he added.

The BCCI chief also insisted that youngsters were also getting a lot to learn and were able to give their best under skipper Virat Kohli and head coach Anil Kumble.

Nair, 25-year-old, who plays for Karnataka in the domestic circuit, joined the former swashbuckling Indian opener Virender Sehwag, who has the distinction of reaching the landmark twice.

The Karnataka boy, playing his third Test, having made his debut in this series only at Mohali, smashed 32 fours and four sixes in his historic innings.

Nair's 303 is now the third highest individual score Test score by an Indian batsman. Sehwag's 319 and 300, followed by VVS Laxman's 281 and Dravid's 278 were the best Test scores before.

Nair became the third player in Test history, and the first Indian, to turn his maiden hundred into a triple century.

He became the 287th player from India to make his Test debut and it only after his Karnataka teammate and India opener KL Rahul was injured in Mohali.

On Sunday, both were batting for India in Chennai. While Rahul was dismissed one run short of a deserved double hundred, Nair also made sure he reaches the three-figure mark.

Playing only his third Test, Nair forged two major partnerships ---181 for the sixth wicket with Ravichandran Ashwin (67) and then 138 for the seventh wicket with Ravindra Jadeja (51) ---to take India to their highest Test total.

This is India's highest score against any opponent surpassing the previous best of 726/9 declared against Sri Lanka in 2009.