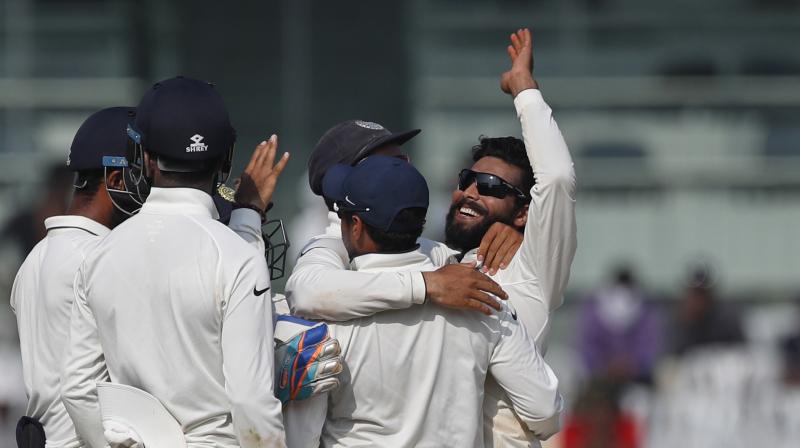 While R Ashwin went wicketless, Ravindra Jadeja rattled the England side with seven wickets on the final day of the Chennai Test. (Photo: AP)

Chennai: 4-0. India dismantled England once again to clinch the series 4-0 series here on Tuesday. Ravindra Jadeja was the star of the show as India defeated England by an innings and 75 runs at Chepauk.

While England openers showed fight, the middle order fumbled big time as Jadeja ran through them with the ball and as a fielder. Amit Mishra, Umesh Yadav and Ishant Sharma took a wicket each while R Ashwin, despite bowling his heart out, was a bit unlucky to go wicketless.

Alastair Cook-led side looked good to draw the game as they did not give away any wickets till the lunch break. However, Jadeja came at the visitors really hard to seal a big Indian win.

England's fall began with Cook's dismissal in the second session. Jadeja got him out for the sixth time. He followed it up by a caught and bowled dismissal of Keaton Jennings. But India dealt a major blow to England's hopes of drawing the Test after Jadeja trapped Joe Root before the wickets. While the on-field umpire ruled Root not out, India's decision to review the umpire's call done wonders as the third umpire adjudged the Yorkshireman out.

Jonny Bairstow was the next man to go off Ishant Sharma as Jadeja yet again played his part in the wicket by taking a brilliant running catch. The Saurashtra cricketer then struck in the final session as he got the better off Moeen Ali, Ben Stokes, Stuart Broad and Jake Ball.