Once you cross 150, it is about playing freely like how you always do and expressing yourself, says Karun 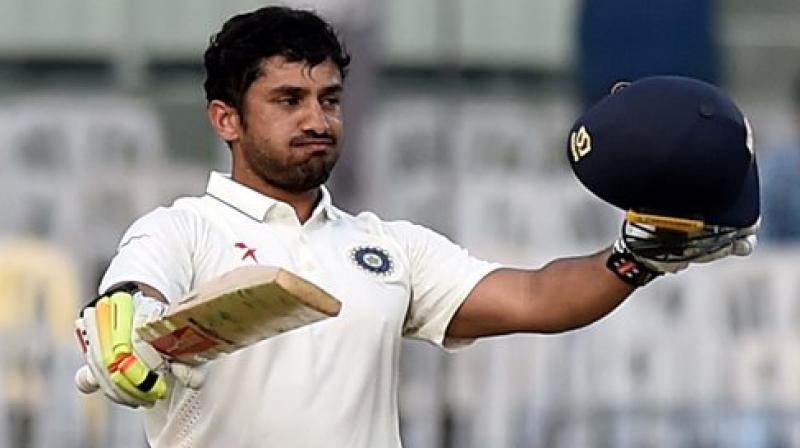 India's Karun Nair celebrates after scoring 300 runs during the fourth day of the fifth cricket test match against England at MAC Stadium in Chennai. (Photo: PTI)

Chennai: It was a tale of two 24 hours that were as far removed from each other as Shimla apples and Nagpur oranges. At 4.40 pm on Monday, when Karun Nair belted a boundary, the 25-year-old, playing in only his third Test, became the second triple-centurion for India and also the first Indian batsman to score a three hundred as his maiden ton.

At almost exactly the same time a day ago, his Karnataka teammate K.L. Rahul was down on his haunches taking an eternity to get to grips with his dismissal on 199.

If there was one act that Nair wouldn’t get tired of repeating through the day, it was that of him raising his bat, a total of five times in all, in acknowledgement of the vociferous roar from the delirious crowd.

It was also a day of merriment for those who feast themselves on number crunching as a host of records were broken by the blade of Nair.

Where any other individual may have been floating on air after a day of such scintillating performance, Nair chose to keep his feet firmly on the ground.

In a media interaction, Nair spoke about what went into the scripting of an epic and more.

When did 300 take shape in your mind?
I never planned it. After I crossed 250, the team management had certain plans of going after the bowling and declaring. So I thought within the space of five overs, I got to 280-285. That’s when I started thinking (about the milestone) and Ravindra Jadeja kept egging me on to not throw it away and get to 300 easily.

Does playing in all the three formats help?
I think it’s all about playing one’s normal game. I thought after I reached 100, the pressure was off. You just go out there and play the shots that you can and you just look to find the gaps. Once you cross 150, it is about playing freely like how you always do and expressing yourself.

What is the status of the pitch?
The pitch has been good on all four days. And it is slowly deteriorating. There are a lot of footmarks, so I think we just have to bowl well and get the wickets. Good bowling does get you wickets on any pitch.

Was he nervous on 99, 199 and 299?
Obviously there are bound to be some nerves. You can’t be thinking negative at that point. You just have to watch the ball and get over that moment.

What did you think of Rahul’s effort?
Like Rahul said, we started playing cricket together. It’s just that we have been together from a young age. At every stage, if he has gone ahead I have caught up. Or if I have gone ahead, he has caught up. So I think that healthy rivalry is good. I feel bad for him that he didn’t get the double hundred but I think he will get one very soon.

You play sweep shots with elan…
I have played the sweep shot almost all my life. You have to practise a lot. I have had to work extremely hard at it. It is my go-to shot whenever I need some boundaries.

If the gaps are open, I go for it.