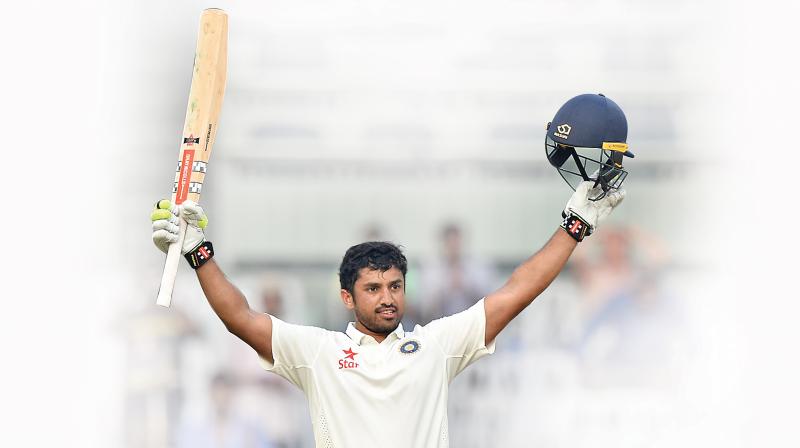 Karun Nair takes in the crowd’s applause after reaching his triple century at the M.A. Chidambaram Stadium in Chennai. (Photo: E.K. Sanjay)

Chennai: A day after K.L. Rahul missed a double hundred by a run on Sunday, his Karnataka team mate and close friend Karun Nair more than made up for it with a triple century the next day. Karun owned the fourth day of the fifth Test against England at the M.A. Chidambaram Stadium. The no. 5 batsman’s rollicking knock of 303 (381 balls, 32x4s, 4x6s) powered India to 759/7, their highest in Tests.

Karun’s blistering knock has reaffirmed Chepauk’s hallowed place in Test cricket’s history as it’s the only venue in the country to witness a triple hundred, not just once, twice. Virender Sehwag scored 319, the highest individual score by an Indian, against South Africa here in 2008.

The diminutive middle-order batsman, who made his debut in the third Test of this series only because of an injury to Ajinkya Rahane, has rewritten the script of the final Test, which until lunch on fourth day was heading for a draw on a batting paradise. England were 12/0 in five overs at Stumps. With Alastair Cook & Co still requiring 270 to make India bat again on the final day, one needn’t be a Nostradamus to say that only the hosts can force a result.

While a glorious cover drive marked his double hundred, a ferocious square-cut brought up the rare landmark. Exhibiting admirable fitness under energy-sapping conditions, the 25-year-old looked classical in many ways, but never shied away from meeting modern-day demands.  He time and again employed the reverse sweep and even went over the wicketkeeper’s head with ramp shots.

The way he paced his innings was masterful. After scoring his century in 185 balls, Karun stepped on the pedal to bring his next two in 121 and 71 balls respectively as Kohli declared soon after the milestone to put England under pressure. Karun’s ability to score big is a no surprise given his proven track record in domestic cricket. He scored a triple hundred against Tamil Nadu in the 2015 Ranji final.

While Karun’s sixth-wicket partnership of 181 runs with R. Ashwin (67) took India past England’s first innings total of 477, a blistering 138-run stand with Ravindra Jadeja added to the visitors’ misery.

Having spent almost two days on the field, England’s fielding was understandably sloppy. And, Karun also enjoyed his share of luck apart from benefitting from England’s weariness. His stay in the middle would have been cut short at 154 had England gone for a review. The Ultra-Edge suggested the ball that landed in wicketkeeper’s hands had come off Karun’s bat while he attempted a reverse sweep in the bowling Rashid. He was dropped on 217 by Joe Root at slips and Johny Bairstow fluffed a stumping chance when Karun sneaked past 250.