Not only did India avenge their 2012 series loss to England at home but the hosts also won their 1st contest against Cook's side since 2011. 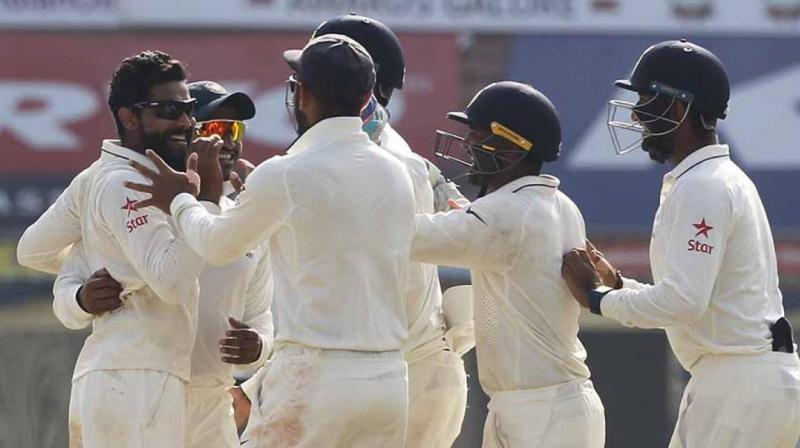 Ravindra Jadeja claimed seven wickets as India thrashed England by an innings and 75 runs in the fifth and final Test in Chennai. (Photo: BCCI)

Chennai: Ravindra Jadeja claimed seven wickets as India thrashed England by an innings and 75 runs in the fifth and final Test in Chennai on Tuesday to win the series 4-0.

The left-arm spinner ended with career-best figures of 7-48 to skittle out England for 207 in their second innings in the final session of play as the tourists were unable to hold on for a draw.

England, who rode on an 103-run opening stand between Alastair Cook and Keaton Jennings, lost six of their batsmen for 15 runs in the evening to capitulate against an inspired Indian attack.

Jennings, who scored a debut century in the fourth Test in Mumbai, top-scored with 54 as England's batting order crumbled under the pressure of having to play out the day to save the match.

The Indian players erupted in celebration after Jadeja got number eleven Jake Ball for nought to finish a memorable series.

Not only did India avenge their 2012 series loss to England at home but the hosts also won their first contest against Cook's side since 2011.

Jadeja spun into action just after the lunch break to send the openers packing and he continued to wreak havoc on what seemed a flat pitch at Chennai's MA Chidambaram Stadium.

England's leading batsmen in Cook (49), Joe Root (6) and Ben Stokes (23) failed to hold on as they fell to the guile of Jadeja's left-arm spin.

Indian batsman Karun Nair had put India on course to victory with his scintillating triple century on Monday.