The one lesson cricket has always shown is on responsive pitches you need less bowlers. 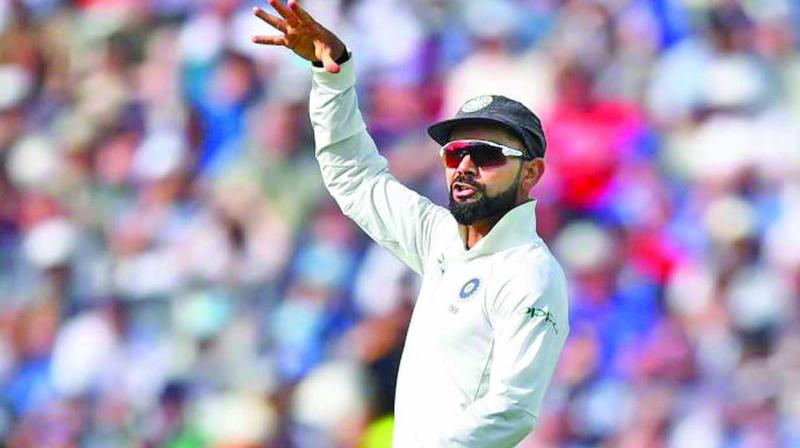 Chennai: The Virat Kohli-Ravi Shastri combine is highly combative by nature. But when it comes to strategic selection for Tests abroad, they invariably come up short. The combo did it again at the new Perth stadium where they failed to pick even a single specialist spinner while a certain Nathan Lyon ran through the Indian batsmen on a pitch that was as nasty as it was quick. The one lesson cricket has always shown is on responsive pitches you need less bowlers.

Three good pacers are as good as four when there is juice in the pitch. The cardinal rule of never going into a match without a specialist spinner was flouted and the duo have paid once again with their reputation for selection blown to bits once again as in South Africa and in England. The first question to ask is whether R. Ashwin was so injured he could not play the game. The second is if it was so, why was Ravindra Jadeja not the choice to replace him.

A great modern masterclass on a nasty pitch by the No. 1 batsman in world cricket today — King Kohli — was laid waste by the poor selection of the playing XI. And yet it was an innings that would have been worth going miles to see or to defy the long hours of a Test match and watch every moment of it on television. No one could have achieved perfection on such a pitch but Kohli came close enough to it, if you forget the tendency to poke beyond off stump, which perhaps is the only systemic flaw in his batting.

It was a matter of pride that an Indian batsman played such a remarkable innings, enduring the pain of knocks on the gloves and above as some deliveries found steepling bounce from length. Kohli’s knock was the equal of Sachin Tendulkar’s effort in 1992 in the same city. Maybe, there was a bit of a challenge in the Fremante Doctor blowing the ball this way and that at the WACA. The inconsistencies of the new Perth stadium pitch were, however, far worse from about the first afternoon.

The WACA surface deteriorated with cracks late in that match 26 years ago, but that was in the second innings when Tendulkar had fallen early.  Kohli’s first innings was played in tougher conditions of capricious bounce and some cleverly bowled off spin by Lyon who bowls from wide of the crease and always has the batsman playing at him. Kohli’s innings was all the more lustrous for his being the skipper and having to put up his hand for the additional responsibility. If one is allowed to judge across eras, the vote would probably just go to Kohli’s 123 edging out Sachin’s 114.

That brings us to the other major talking point. For all his calm and collected ways at the crease, Kohli is a time bomb in the field, always on a short fuse, looking to score the odd verbal point, jumping around at the fall of wickets in overweening triumphalism that seems overdone despite his propensity to pump himself up for the occasion every time. In sport, you win some and you lose some, which is why certain philosophical acceptance becomes a mental crutch for even the world’s best not so accustomed to defeat as ordinary mortals.

The bigger point is we have railed against the Ugly Aussies for generations and we find our captain being just the same — boorishly competitive guy on the field, wearing his heart and his emotions on his sleeve and sledges, perhaps more intelligently than the repetitive cussing crowd who give the same ‘gallis’ every day of the week. The larger question is should he be doing all this. He leads the world’s highest ranked Test side and he has batted himself into not only the record books but into the aesthetic connoisseur’s heart with an elegance to match his acquisitiveness.

The Ugly Aussies dominated world cricket like none else well into the new millennium too. They seemed to feed off their ultra-competitiveness to sweep all before them, including winning Test series in India and the first of their five World Cups here too. They were not winning popularity contests but triumphing on the field with their extreme bumptiousness. Do we need to emulate them at a time when we have done well enough to be the top Test side of the era and in the top bracket in ODIs too? The point to ponder is do we need to continue to be the Ugly Indians on the field.