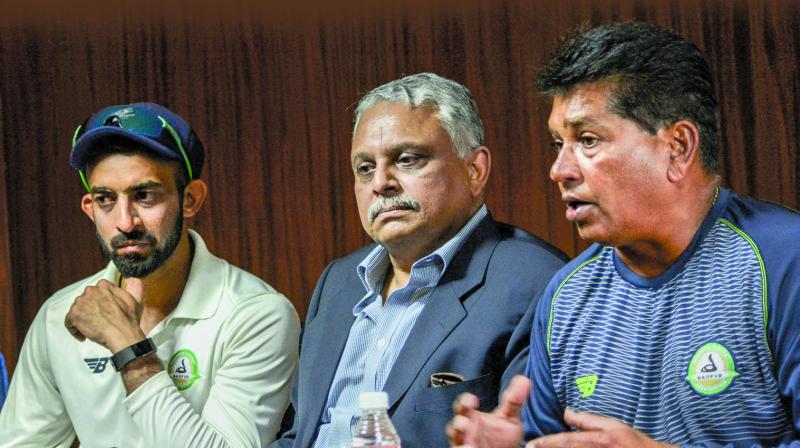 The management skills have fetched him seven titles as coach in first class cricket so far including five Ranji Trophy titles.

Former Mumbai coach Chandrakant Pandit is known for imposing discipline in his team. The strict coaching measures have made him one of the most successful coaches in domestic cricket especially in the longer format. He  is even known to impose fines on players for not maintaining discipline and also reward them for their performances.

“There are two ways of looking at it. There is penalty for no balls during practice sessions, even coming late for team dinners or whatever team activity. At the same, if they perform well, the coach rewards them. That’s how it is being done—they like it follow it and enjoy it,” Pandit said in an interview to this paper.

The management skills have fetched him seven titles as coach in first class cricket so far including five Ranji Trophy titles. He has been instrumental in Vidarbha’s successful title defence of Ranji Trophy and Irani Cup in recent times. The former Indian wicketkeeper- batsman has also coached Mumbai to three Ranji Trophy titles.

“The idea is to not run after results but work on a process. I thank God for giving me all this strength. Players make the coaches, coaches do not make players. They have to play and implement instructions on the field. It is like somebody playing music and they have to dance. The key is what kind of music can make them dance,” he said.

“It is always good to win a title. Every team plays for the same. There were nine more teams this time, total 37, and every team looking forward to win this and when the team gets that, it is pleasure. It was different this time, to maintain reputation, retain trophy, playing better teams in better half and only five teams were supposed to qualify for knock out from 18 (in Group A and B), it was tough,” he said.

“We only had five points after three matches and were at the 12th place. I told my players we need one breakthrough game and it came against Chattisgarh, followed by Railways. We were now third on the table and that motivated them and they worked hard on that,” Pandit added.

On the role of former Mumbai player Jaffer who has now won ten titles as a player, Pandit lavished praise on the 41-year-old veteran.

“Vidarbha team is an obedient group. There are no juniors and seniors in our team, it is only about experience and inexperience. If I say something that’s the last line they seem to follow, they have so much respect towards me. Even Umesh Yadav who came from Indian Test team follows all routines and is a role model.

“Wasim was with me in Mumbai and is aware about my strict coaching methods. He helped me a lot to develop that culture which we wanted to imbibe in Vidarbha. He played equally a good role to imbibe in youngsters to how to play good cricket. His guidance for batsmen was of great help for me, great help for individual players and team. In the dressing room he was always sharing ideas about coming from a strong team like Mumbai and why he has been able to perform,” he says.

He further adds, “Faiz is well cultured and disciplined. He has  a habit of routines and training sessions and is an automatic role model for players with so much hunger to play higher level of cricket. Youngsters watching them get inspired. Even Satish, (former Karnataka player) though doesn’t speak much but his actions speak much, he guides young players.”

Wasim Jaffer and Umesh Yadav didn’t play in Irani Cup recently, but Vidarbha defeated the rest of India without them having to show that youngsters have come of age. “It is important for any coach to create a healthy competition and give youngsters confidence. VCA (Vidarbha Cricket Association) vice president Prashant Vaidya and selection committee gave opportunity. We adapted ‘horses for courses’ policy throughout and players got used to it. Healthy competition was created. Youngsters mixed with seniors while performing that kind of confidence they had gained. It was a great achievement for boys without Wasim Jaffer and Umesh Yadav. They were not only experienced but performers and probably sometimes team’s morale is down but this wasn’t the case here.

“I kept saying to the players that without them we can win if they are there we can do wonders that kind of attitude was created in the dressing room. They not only learned to handle pressure, but also to put pressure on opposition and never left the grip.