The tournament was organised by St. Xavier’s High School in honour of their ex-student and legend Gavaskar. 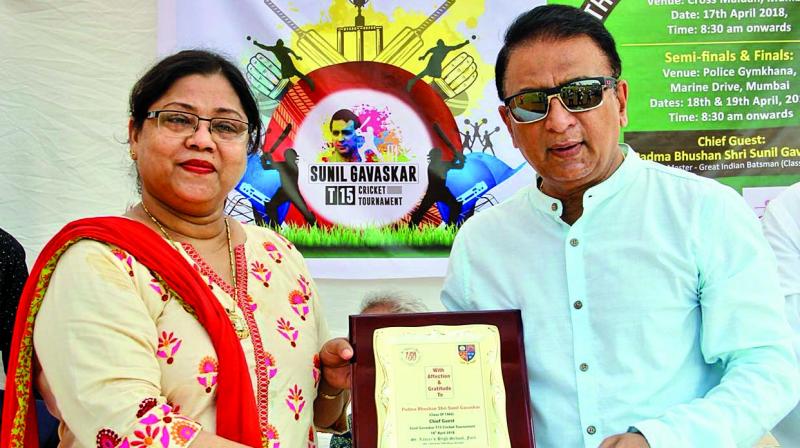 Sunil Gavaskar handing over the memento

St. Xavier’s High School, Fort defeated St. Mary’s HS, Mazgaon by three runs in today’s final to clinch the Sunil Gavaskar T-15 Cricket tournament at the Police Gymkhana. Man of the Match and Man of the Series Ahish Chorge scored an unbeaten 45 to help St. Xavier’s reach 86/9 after St. Mary’s won the toss and elected to field. Ahish also grabbed a wicket as the champions restricted St. Mary’s to 83/9.

Seven leading Jesuit schools from across Mumbai competed in the exciting 15-over format. The tournament was organised by St. Xavier’s High School in honour of their ex-student and legend Gavaskar. This was part of their year-long sesquicentennial jubilee year celebrations. Gavaskar graced the occasion as the chief guest. “It was wonderful to see the school boys play the new format with such energy and enthusiasm,” he said.

St. Xaviers High School principal Jennifer Dias said: “We at Xavier’s, have a long tradition of excellence in sports. A living testimony is Sunil Gavaskar, the master batsman and ex-student of our school. This tournament is being instituted in our 150th Jubilee Year to celebrate the school’s rich sporting tradition, as a tribute to Sunil Gavaskar’s remarkable achievements as a cricketer and as an inspiration to young Xavierites,” he said.