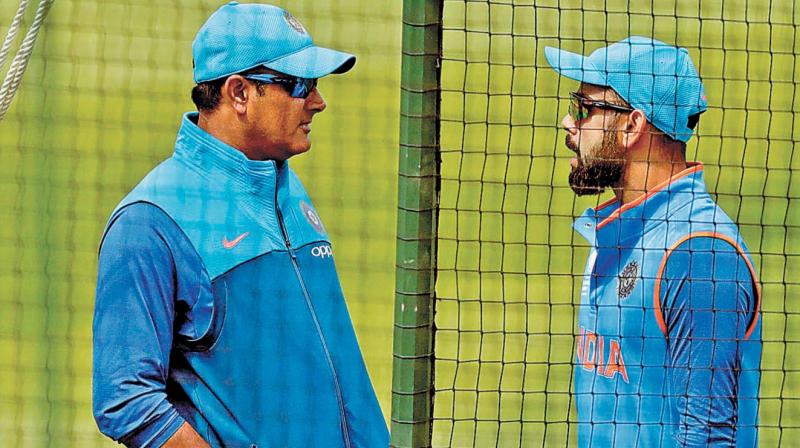 New Delhi: Two days after India crashed in flames in the final of the Champions Trophy, losing to Pakistan by a spectacular 180 runs, chief coach Anil Kumble opted not to take the flight out with the team to the West Indies, sparking off a firestorm of speculation.

Technically, Kumble’s year-long contract ended on Sunday but he had agreed to stay on in the job for another couple of weeks — the duration of the Caribbean trip despite the reported opposition of India captain Virat Kohli.

While there has been plenty of support for him, from within the cricket control board, the Supreme Court-appointed Committee of Administrators as also the cricket advisory committee of former team mates Tendulkar, Laxman and Ganguly, it was also evident that Kumble was increasingly in a difficult position.

The BCCI acted quickly on Tuesday evening, putting out a statement thanking Kumble’s contributions in the job and conforming that he had indeed stepped down.

“The Board of Control for Cricket in India confirms that Mr Anil Kumble has withdrawn his services as the post of the Head Coach for the Senior India Men’s team,” the statement issued by acting secretary Amitabh Choudhary said.

“While the Cricket Advisory Committee had endorsed an extension to his tenure as Head Coach, Mr Anil Kumble has decided not to continue as the coach.

“We wish to place on record our sincere appreciation for the immense contribution by Anil Kumble to the team which enabled India to attain the no.1 Test position. Indian cricket needs his continued contribution in various capacities and wishes him all the best in his future endeavour.

“The BCCI will continue to seek the assistance of the Cricket Advisory Committee in its search for a new Head Coach for the Senior India Men’s Cricket Team. In the interim, the BCCI has deputed Dr. M.V. Sridhar, GM - Cricket Operations to supervise the Team Management for the West Indies tour.

Kumble stayed back in London to attend the ICC’s cricket committee meeting, of which he is the chairman, on Thursday, while India’s opening match of a five-game one-day international series is at the Queens Park Oval in Trinidad on Friday.