Sports   Cricket  21 Jun 2019  'I don't play for Gulbadin or cricket board, I play for Afghanistan': Rashid Khan
Sports, Cricket

'I don't play for Gulbadin or cricket board, I play for Afghanistan': Rashid Khan

Rashid made the statement when asked if his relationship with skipper Gulbadin Naib has strained for voicing his displeasure at change of captaincy. 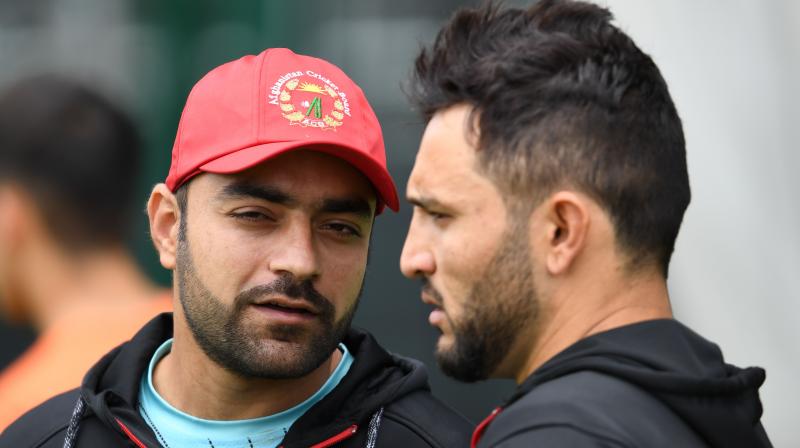 Rashid calls it a principle stand and not against any particular individual. (Photo: AFP)

Southampton: "Neither do I play for Gulbadin nor for the cricket board (ACB) but for Afghanistan," said the team's star spinner Rashid Khan.

Rashid made the statement when asked if his relationship with skipper Gulbadin Naib has strained for voicing his displeasure at change of captaincy.

Rashid and Afghanistan's other superstar Mohammed Nabi had raised objections when Gulbadin replaced Asghar Afghan as the skipper for the World Cup, something that didn't go down well with the country's cricket board.

With five straight losses, there are a lot of conspiracy theories being floated including one about Rashid's strained relationship with Gulbadin, something that might have impacted the spinner's performance, which includes World Cup's worst bowling figures against England.

"I think there is no problem in my relationship with Gulbadin. I support him as much as I did when Asghar was the captain. If I supported Asghar 50 per cent on the field, Gulbadin has my 100 per cent support," Rashid told PTI in an exclusive interview on the eve of their match against India.

"Right from the time we landed in England, no one has spoken about the issue. I think it was blown out of proportion by the media. Some of us have been playing together for 15-16 years. So if nothing has happened in more than a decade, then what can suddenly change in a day or two."

But when it comes to his take on change in captaincy, Rashid chose to stick to his guns.

"Neither do I play for Gulbadin nor for the cricket board. I play for the flag, for Afghanistan. I know what my job is and I will continue doing that.

"That tweet by me or Nabi wasn't in support of Asghar. We raised our voice for the betterment of Afghanistan cricket," the 20-year-old spinner, who is an important member of IPL team Sunrisers Hyderabad said.

Rashid calls it a principle stand and not against any particular individual.

"Had someone else been appointed captain, my stand wouldn't have changed. That wasn't the right time to change the captain. I have nothing personal in supporting Asghar. I am not the only person who's saying that. The whole world is saying that" he said.

Rashid then explained why he felt that the time was not appropriate to change captaincy.

"We were going to play a big event like the World Cup. The combination didn't seem like Asia Cup and if you tinker with the combination before a big tournament, it's not a great thing. That was the reason for the tweet," he said.

Used to being showered with accolades for game-changing performances, the ignominy of recording World Cup's worst-ever bowling performance (9-0-110-0) has been a humbling experience, especially with the kind of brickbats he received on social media.

"I am not thinking too much about that match. People forget 10 good days and conveniently remember that one particular bad day. They don't like to remember what Rashid did on previous 10 days," he said.

"I would focus on the mistakes I committed in that match and rectify those in the coming matches. No point thinking about the criticism. I need to keep things simple," added the 20-year-old, putting up a brave front.

But he did acknowledge that not playing enough games against big teams has been a huge factor for the Afghans.

"Actually, we haven't played a lot against teams like Australia and England and that pressure is also there. In a stage like World cup, suddenly the pressure increases manifold when you play against big sides and that can affect the performance," Rashid reasoned.

"This is the first time, we played South Africa in an ODI. We played New Zealand and Australia after the 2015 World Cup. If you play a team once in four years, you are bound to face problems. As players, we understood we need to work harder."

He did accept that Afghanistan need work on its bowling department.

"As a bowling unit, we need to do more. Yes, we have been struggling in pace bowling department. I think we need to have proper 140 kph plus bowlers. We need these bowlers in these conditions. It's not that we will get these kinds of bowlers in a year. It will take time," Rashid signed off.