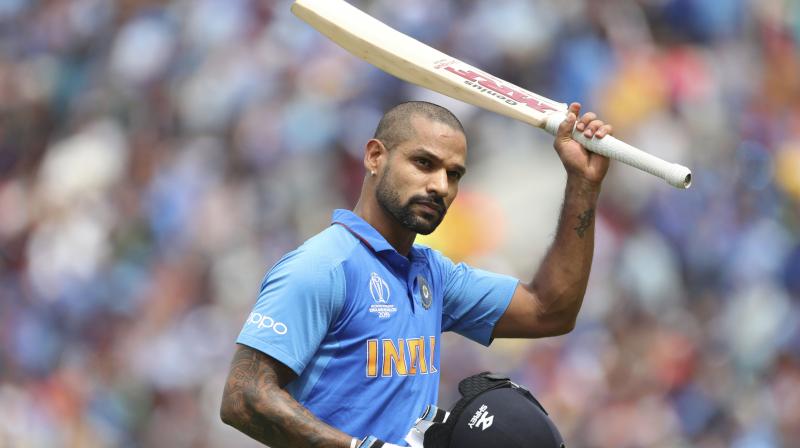 Speculations over Captain Virat Kohli being rested for the tour were put to rest as the batting mainstay will lead India across formats. (Photo: AP/PTI)

Mumbai: Opener Shikhar Dhawan Sunday returned to India's limited overs squad after recovering from a thumb injury while Rishabh Pant was picked in all three formats for the West Indies tour as the selectors braced up for life beyond Mahendra Singh Dhoni.

Former India captain Dhoni, who is at the business end of his illustrious career, has made himself "unavailable" for the West Indies tour but ruled out immediate retirement.

Speculations over Captain Virat Kohli being rested for the tour were put to rest as the batting mainstay will lead India across formats.

Rookie leg-spinner Rahul Chahar emerged as the lone new face across three formats for the upcoming overseas assignments, while all-rounder Hardik Pandya has been rested for the tour. Also coming back into the ODI squad are Shreyas Iyer and Manish Pandey.

Promising batsman Shubman Gill, though, missed out on selection.

The squads for the T20, ODI and Test series were announced by the MSK Prasad-led selection committee.

A notable inclusion was veteran keeper-batsman Wriddhiman Saha, who is back in the Test squad after undergoing a shoulder surgery for an injury, sustained during the 2018 IPL.

Rajasthan leg-spinner Chahar has been rewarded for his consistent show in the IPL and domestic cricket with a berth in the Twenty20 squad. He is the younger cousin of seamer Deepak, who is also in the T20 squad.

From the World Cup squad, the prominent player to be dropped is Dinesh Karthik, while Hardik and Jasprit Bumrah have been rested as a part of the board's workload management programme.

Bumrah, though, is part of the Test squad.

Quite a few of the players were picked based on their performance for India A recently.

"We have taken India A performances into consideration. In the longer format, KS Bharat was very, very close to get selected. We have an unwritten norm that when an established cricketer is injured, he should get a comeback opportunity. That's what we have given to Saha," chief selector Prasad said.

Pant, who was included in India's World Cup campaign after Vijay Shankar's toe injury, has been named in the squad across all three formats.

Dhawan, whose World Cup journey was cut short due to a thumb fracture during the second group game against Australia, has been declared fit.

Bhuvneshwar Kumar will spearhead the attack in the shortest format with Mohammed Shami joining him for the three ODIs. Dehli pacer Navdeep Saini has been included in the limited overs side while Deepak Chahar was picked for the T20Is.

"Rishabh, Wriddhiman and K S Bharat are some of the players we will be looking ahead for Test cricket."

"We had certain plans for the World Cup but after that we have to give opportunities to youngsters who will go on to play for long," Prasad said of the the young faces in the limited overs squads.

The young Prithvi Shaw was not part of the squad as he is recovering from an injury.