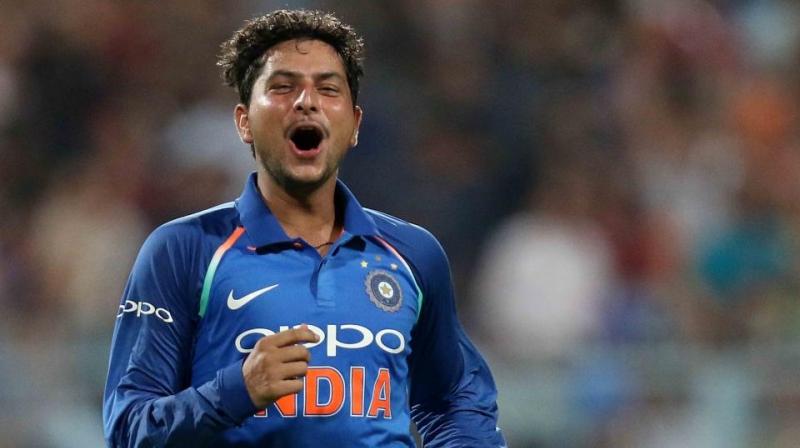 Kolkata: Virat Kohli’s Team India completed a 50-run win over Australia in the second ODI here on Thursday, thanks to a sensational hat-trick from Kuldeep Yadav. Having decided to bat, India lost Rohit Sharma early, but Virat Kohli and Ajinkya Rahane took the team forward, finishing the innings at 252 all out.

Both Kohli (92) and Rahane (55)  got out during the innings, with the former being eight short of his 31st ODI ton. For the Aussie bowlers, Nathan-Coulter-Nile and Kane Richardson picked up three wickets, while Pat Cummins and Ashton Agar picked one each.

In reply, the Aussies never looked settled, after having lost openers Hilton Cartwright and David Warner early.  But, captain Steve Smith’s 59 in his 100th ODI gave hope for the visitors. Marcus Stoinis, too, joined the party by scoring his maiden fifty, but Kane Richardson’s departure courtesy the final wicket for Bhuvneshwar denied Australia the match.

Australia will have one last chance to step up in this series when the two teams now head to Indore for the third ODI on Sunday.

WICKET! Hardik Pandya has got yet another wicket as Coulter-Nile is caught and bowled , with the visitors losing their ninth wicket.

WICKETS! Kuldeep Yadav strikes as he gets his first hat-trick in ODI cricket, by removing Mathhew Wade, Ashton Agar and  in three balls.

In his 100th ODI, Australia captain Steve Smith has got to his 18th ODI fifty with a calm and composed innings.

WICKET! MS Dhoni does the trick as he stumps out Glenn Maxwell, as Chahal strikes yet again. India are back in the game now.

WICKET! Chahal's spin magic does the trick with a full toss to Travis Head, and Manish Pandey takes a spectacular catch at midwicket.

Steve Smith and Travis Head have revived Australia's innings as they went past the 50-run mark, needing less than 200 to win now.

WICKET! Bhuvneshwar strikes as he removes Hilton Cartwright early in the innings.

WICKET! India get all-out. Chahal looks to steal off a bye on the last ball, but gives up on the chase midway after Kumar at the other end stands still. Wade from behind runs up to the stumps and uproots the bails.

WICKET! Hardik Pandya departs after he hits a slower full toss off Stonis straight to Warner at long off.

WICKET!Wickets continue to tumble for India as Kuldeep Yadav follows Bhuvneshwar, who departed in the previous over.

Just when India inched towards the 250-run mark, the covers came off, and players walked off the field, as rain made its entry.

WICKET! It doesn't last long for Dhoni. Kane Richardson forces Dhoni to play on the drive and he chips it straight to Smith at short extra cover.

WICKET! Kohli departs for a well made 92. The Indian skipper tries to run down a tight delivery from Coulter-Nile but chops the ball onto his stumps. Pandya joins MS Dhoni at the crease.

WICKET! After a stable partnership with Virat Kohli at the crease, Kedar Jadhav has thrown it away. Coulter-Nile bangs it short with a bit of with and Jadhav flashes after it, only to hand it straight to Maxwell at backward point.

WICKET! Ashton Agar has ended Manish Pandey's stay in the middle. He tried to cut but the idea has clearly backfired as the ball hits the top of the off stump. Pandey has struggled to get going and Australia have made sure they cash in on Pandey's struggle.

WICKET! Oh dear, no! Ajinkya Rahane has not made it back in time. Run out. He dives but in vain. The Mumbai batsman, who notched up his 20th ODI fifty, departs for 55.

ANOTHER FIFTY FOR KOHLI! The Indian skipper struggled initially but he is looking at ease now as he brings up his 45th ODI half-century. Rahane is 2 runs away from his fifty.

after losing Rohit Sharma early, captain Virat Kohli and Ajinkya Rahane continued to take India forward as they went past 50.

WICKET! A fuller delivery by Coulter-Nile but Rohit fails to hit it on the drive and gets the bottom of the bat, gives an easy catch back to the bowler.

Virat Kohli wins the toss and elects to bat first once again.