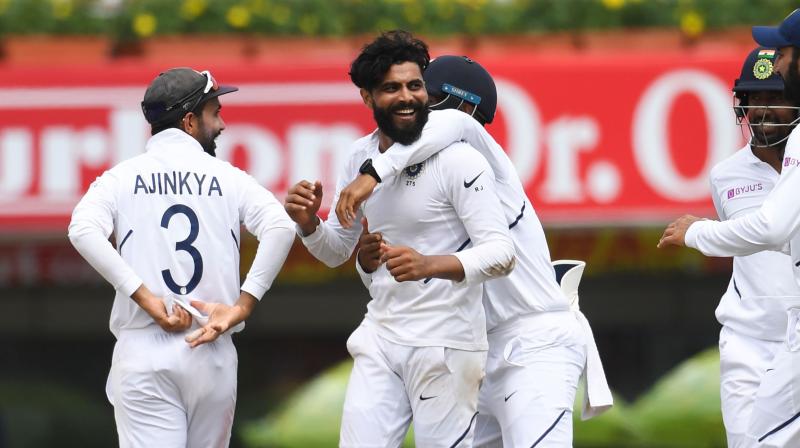 The duo of Hamza and Bavuma put up a much-needed fight for South Africa before Jadeja provided the breakthrough by dismissing Hamza for 62 with a straighter one. (Photo: AFP)

Ranchi: India spinner Ravindra Jadeja rattled the South African batting after an entertaining half-century by Zubayr Hamza to leave the visitors reeling at 129 for six at lunch on day three of the third and final Test here on Monday.

South Africa, who began the day at nine for two, trail India by 368 runs.

Replacing an injured Aiden Markram, Hamza (62 off 79) showed fine application alongside Temba Bavuma (32) to give the Proteas some ray of hope after Umesh Yadav cleaned up skipper Faf du Plessis in his first over with a beautiful outswinger.

Hamza, who struck 10 boundaries, hit seasoned off-spinner Ravichandran Ashwin for a six over mid-on to bring up his maiden fifty.

Hamza showed fine application and collected boundaries at regular intervals tackling both pace and spin well while Bavuma gave him solid support in their 91-run stand for the fourth wicket.

The duo put up a much-needed fight for South Africa before Jadeja provided the breakthrough by dismissing Hamza for 62 with a straighter one that crashed through the gate.

Then came "the big moment" for debutant Shahbaz Nadeem who had Bavuma stumped for his first wicket in international cricket. He foxed Bavuma with his flight as the batsman stepped out of the crease, leaving Wriddhiman Saha to do the rest.

Earlier, India had an eventful first over as Yadav produced an unplayable delivery that swung late to unsettle the off-stump of du Plessis, who left the crease shaking his head.

A few balls stayed really low while Shami was extracting fine bounce from the Pavillion end.

Yadav looked ominous and was unlucky a couple of times when Hamza edged it just short of Virat Kohli at first slip.

Hamza soon found himself at ease displaying some beautiful drives to race to his 50 off 56 balls.