South Africa resumed their first innings from 9/2 but Umesh Yadav picked skipper Faf du Plessis' wicket in the very first over of the day. 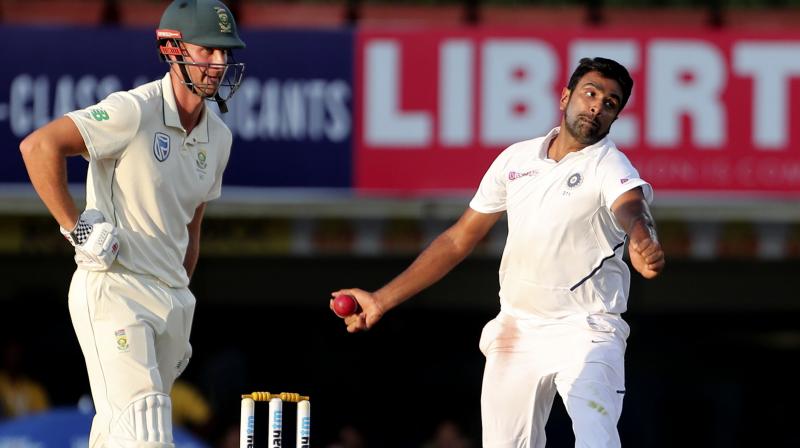 Ranchi: India are just two wickets away from registering a massive victory over South Africa in the third Test match as they completely overpowered the visitors on Day Three of the clash here on Monday.

India displayed a brilliant performance with the ball on Day Three as they ended the Proteas' first innings and then in the second innings, clinched eight wickets. South Africa are on 132/8 and still need 203 runs to win.

South Africa's second innings was no different from their first innings as they had a very poor start and gave away two early wickets -- Quinton de Kock and Zubayr Hamza -- under three over.

Opener Dean Elgar was then joined by Faf du Plessis but the latter failed as he was given LBW off Mohammed Shami's delivery. In his next over, Shami took the wicket of Temba Bavuma, who was caught behind on a duck.

South Africa faced a major blow as Elgar was struck on the helmet by Umesh Yadav and the batsman left the field. Later, Theunis de Bruyn was named as his concussion replacement.

George Linde and Heinrich Klaasen took the charge but failed to form a partnership as the latter was given LBW off Yadav's ball.

Soon after, due to bad communication, Linde too was sent back to the pavilion as he was run out. Dane Piedt scored 23 runs before Jadeja bowled him and the visitors were seven down before they could reach the 100-run mark.

Kagiso Rabada came to bat when the team was on 98/7 and joined Bruyn. Rabada started smashing boundaries but after a few shots he gave away an easy catch to Jadeja off Ravichandran Ashwin. South Africa did not lose more wickets thereafter.

Earlier, South Africa resumed their first innings from 9/2 but Umesh Yadav picked skipper Faf du Plessis' wicket in the very first over of the day. Zubayr Hamza was then joined by Temba Bavuma on the field.

Both played brilliantly and struck regular boundaries to provide the Proteas with some momentum. Hamza completed his half-century but soon after Ravindra Jadeja dismissed him to end his 62-run innings. In the next over, Shahbaz Nadeem got hold of Bavuma (32), reducing the visitors to 107/5.

The fall of wickets did not stop and South Africa only managed to add 55 runs to the board before India ended their first innings. Umesh Yadav picked three wickets while Jadeja, Nadeem, and Mohammed Shami took two wickets each in the first innings.