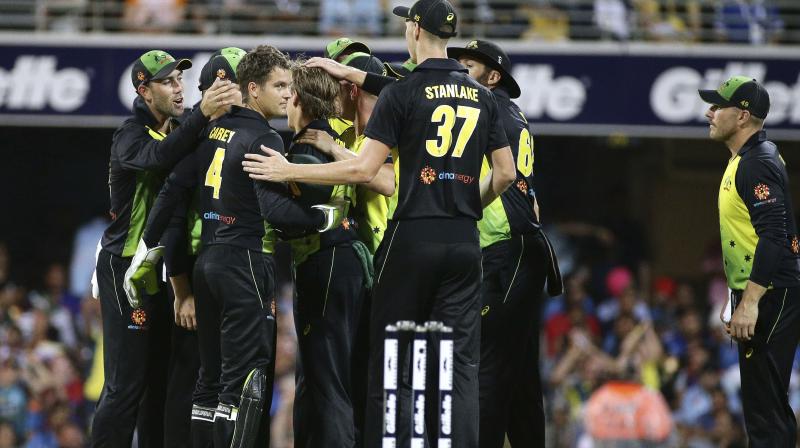 Brisbane: India collapsed in the final hurdle as Australia completed a thrilling win to take a 1-0 lead in the first of the three T20Is here at the Gabba on Wednesday.

Needing 13 to win from the final over, Marcus Stoinis dismissed Krunal Pandya (2 runs) and Dinesh Karthik (30) as the hosts scripted a massive comeback.

While Shikhar Dhawan’s knock of 76 gave the Men in Blue hope in the earlier stages of the game, Virat Kohli’s tour Down Under got off to a horrific start after having been dismissed for just four runs by Adam Zampa.

However, a 51-run stand between Dinesh Karthik and Rishabh Pant (20) had given the visitors some hope again before the latter was removed by Andrew Tye.

Zampa and Stoinis picked up two wickets each, whereas Jason Behrendorff, Billy Stanlake and Andrew Tye finished with one wick each.

WICKET! Billy Stanlake finally gets a wicket as he dismisses dangerman Shikhar Dhawan for 76

STUMPED! Alex Carey does a good job behind the wickets to see off KL Rahul for 13 off Adam Zampa's bowling

Australia finished their innings at 158-4 from 17 overs after the match was halted for an hour due to rain.

Under the Duckworth Lewis method, the visitors' target is 174 from 17 overs.

Kuldeep Yadav (4/24) had a decent spell but Khaleel Ahmed (1/42) had an expensive one despite dismissing D ' Arcy Short.

WICKET! Breakthrough for India as Bumrah sees off Maxwell for 46 runs.

The covers are on at the Gabba after heavy drizzles have resulted in play being stopped. India got the start they wanted but things it's been a rough ride for the bowlers in the last few overs, with Australia flexing their muscles. Glenn Maxwell and Marcus Stoinis are well set and a will be eyeing something around the 200-mark.

Experience of playing in IPL against India’s bowlers has evidently been to advantage of Aus batsmen. India’s fielders haven’t helped their team with dropped catches and misfields

Upper decker! Chris Lynn launched a 108m six into the hands of Old Mate in the stands 🙌#AUSvIND @bet365_aus pic.twitter.com/vaxgQT6dAQ

KULDEEP GETS HIS REVENGE! Chris Lynn fails to pick the wrong 'un, plays it softly back to the bowler.

CAUGHT! Khaleel Ahmed strikes on the first ball of his spell, getting rid of the dangerous D'Arcy Short.

DROPPED! Jasprit Bumrah pitched it full outside off, making Aaron Finch go for the drive which rips right through Virat Kohli's hands at short cover.

The action that you have been waiting for is finally here. As one of the most anticipated rivalries in international cricket resumes, India start as firm favourites against the embattled Australians in a three-match T20I rubber starting on Wednesday at the Gabba.

The Men in Blue have clinched their previous seven T20I series and would be hoping to extend their dominance in the shortest-format, yet again. India, then led by MS Dhoni had completed a 3-0 clean sweep during their last visit in 2016 and would aim to reign supreme again.

Meanwhile, Australia, who have been undergoing a structural reform in the wake of the ball-tampering scandal against South Africa earlier this year has not been the force to reckon with in the absence of David Warner, Steve Smith and Cameron Bancroft.

After being rested against West Indies for the T20s, skipper Virat Kohli returns to the squad and with a strong side at their disposal, the visitors will hope to start the tour on a bright note.

It remains to be seen how Aaron Finch and his men cope up with the pressure as they aim to defy the odds.

India have won the toss and elected to bowl first #AUSvIND pic.twitter.com/DgwRrjsb6X

Here are both the playing XI's for today -

Where to watch the matches live?

Live streaming: It can also be streamed live on Sony LIV, the digital platform on the internet.