Smith took blame for ball-tampering scandal to save side: Flintoff

'I can't believe that the whole team isn't in on it. As a bowler, if someone gives me a ball that's been tampered with, I know initially' 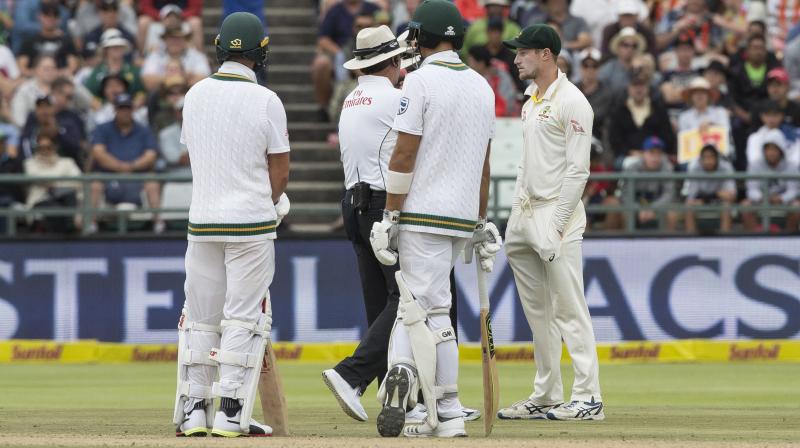 Cameron Bancroft of Australia (R) is questioned by umpires regarding ball tampering on the third day of the third cricket Test at Newlands Stadium, in Cape Town, South Africa, Saturday. AP Photo

London: Former England all-rounder Andrew Flintoff believes the entire Australian team was involved in the ball-tampering scandal that rocked world cricket in 2018 and then skipper Steve Smith "took the blame" just to save his side.

Smith was suspended for a year along with David Warner and Cameron Bancroft after being indicted in the sandpaper-gate during a Test match against South Africa in Cape Town.

"I can't believe that the whole team isn't in on it. As a bowler, if someone gives me a ball that's been tampered with, I know initially. One of the things that Steve Smith did is take the blame for everyone else," Flintoff told Talksport.

"Things like ball tampering have gone on for a long, long time and I think it's just the degrees where you take it. We were accused of putting sweets on the ball. People put suncream on it, tried everything they can."

Smith was also banned from taking any leadership roles for two years -- a suspension which has now expired.

The England legend said it is difficult to believe that others in the team did not have a clue about what was going on.

"Sandpaper is wrong, but it's stupid more than anything. But I can't believe that everyone in the team wasn't involved in some way or another," said Flintoff, who took 400 wickets and scored over 7000 runs in his career.

Flintoff, who retired from the longer format after the 2009 Ashes, said he would give up everything to play one more Test for England.

"It's getting easier as I'm 42 and don't think I should be playing cricket now, but when I finished at 31, I couldn't go anywhere near it, I just wanted to be a cricketer. Still now I would swap everything I do to play one more Test match and wear that England badge at Old Trafford one more time.

"It's only when it's finished that you think I should have cherished it more. When it's gone it's so hard."