Gulbadin said that the team should try to display their A game in every match. 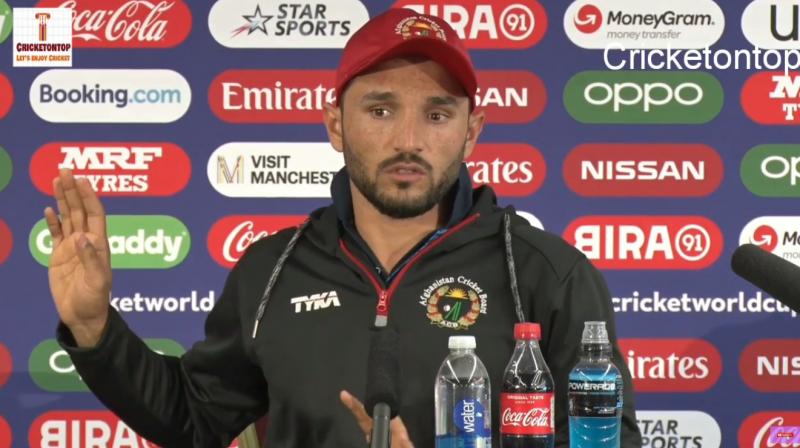 Gulbadin Naib has shown good skills with both bat and ball in the ongoing World Cup. (Photo: Screengrab Cricketontop /YouTube)

Southampton: As Afghanistan and India get ready to lock horns with each other in the ongoing ICC Men's Cricket World Cup, Afghan skipper Gulbadin Naib on Friday said that India is one of the favourites in the tournament and Afghanistan would try to showcase a spirited performance against the Men in Blue.

"India is a very good team and they are one of the favourites in the World Cup. India is a top-ranked team and we will try to showcase a good performance against them," Gulbadin said at the pre-match conference in Southampton.

Afghanistan had a dismal show with the ball in their last match against England as they conceded 397 runs and their main bowler Rashid Khan became the most expensive spin-bowler in the history of ODIs.

Rashid conceded 110 in his nine overs and he was subjected to severe criticism from various quarters. but Afghanistan skipper Gulbadin came in defence of Rashid and that the bowler is looking forward to the match against India.

"England are the favourites to win the World Cup. If you look at our match against them, the credit goes to England side as they played a really good brand of cricket. After the match against England, our morale is okay, we are focusing on every single game, Gulbadin said.

"Rashid just had a bad day, he is not an easy bowler to go after. Credit goes to England as they played really well against him. I saw him today and he is looking totally different. He is just focusing on the next match," he added.

The Afghanistan skipper said that the team had a good chance to beat Sri Lanka but the side was not able to latch on to the opportunity. He added that Afghanistan is growing in terms of cricketing stature.

"Everyone knows that Afghanistan is a growing team. For me, it's good that we are among the top 10 teams. We are learning and it's a very special experience for us. If you look at Afghanistan, you can spot the changes which have occurred in the last four to five years. There was a chance to beat Sri Lanka but we missed it," Gulbadin said.

"We learnt a lot of things in our last five games. We are there in world cricket, we are competing in a tournament which has the world's best ten teams so it is a good experience for us," he added.

Gulbadin said that the team should try to display their A game in every match and he also said that the Afghanistan Cricket Board (ACB) is constantly trying to schedule the team's matches against the top-ranked sides in the world.

The Afghanistan skipper has shown good skills with both bat and ball in the ongoing World Cup. In the team's last match against England, all bowlers were dispatched all around the park, but Naib was able to stand on his own as he scalped three wickets.

Gulbadin came to bat as an opener against England and he managed to score 37 runs off just 28 balls to give Afghanistan a steady start. Gulbadin said that if the team requires him to bat up the order, he will do it.

"If the team requires me to bat higher in the batting order, I will do it. I am trying to give my hundred per cent to the team," he said.

So far, Afghanistan has not been able to display good performance in the World Cup. The team has lost all their matches, and they were only able to show fight against Sri Lanka.

Afghanistan takes on India on June 22 in Southampton.