ICC CWC'19: India vs Afghanistan; determining the loopholes and core of the team

India will look to carry on its winning run, having defeated heavy weights Australia, inconsistent Pakistan and South Africa. 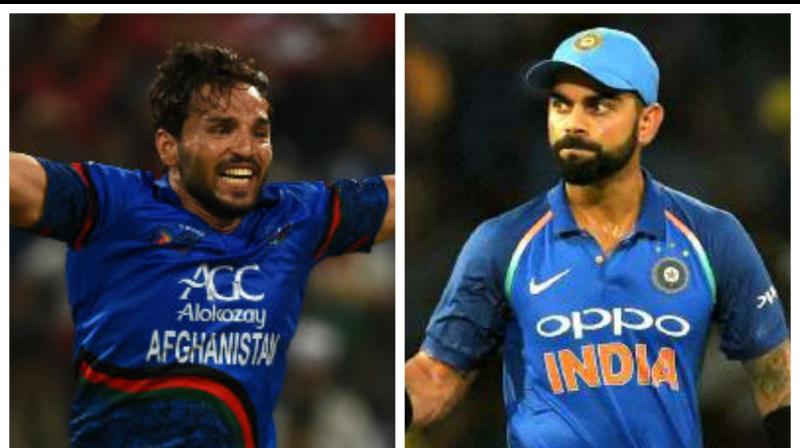 On the other hand, Afghanistan who will aim to halt India’s winning streak, has lost all the five matches it played. (Photo:AFP)

Mumbai: Rampaging India will look to carry on its winning run, having defeated heavy weights Australia, inconsistent Pakistan and World Cup exiting South Africa. On the other hand, Afghanistan who will aim to halt India’s winning streak, has lost all the five matches it played.

Now that Dhawan has been ruled out of the 2019 World Cup, KL Rahul will be expected to anchor the innings, with Rohit Sharma will be the aggressive opener. KL already has notched up his maiden hundred during the warm up match against Bangladesh.

During the match against Pakistan, we saw KL Rahul and Rohit Sharma cooperation and coordinating with each other. So it seems that the duo is working on improving their communication.

If we talk about the middle order, then, the middle order also has been in good touch with captain Kohli getting 82 against the Australians and 77 against Pakistan, and Mahendra Singh Dhoni also showed his prime form when he slammed a hundred along with KL Rahul to guide India to their victory during their warm up match versus the Bangladeshis.

Now, the real question remains is who will bat at number four – will it be Vijay Shankar, Dinesh Karthik or World Cup ousted player, Rishabh Pant?.

During the match against Australia, Bhuvneshwar Kumar picked up three important wickets, barring that match Bhuvneshwar kumar has failed to pick up wickets. However, Mohammed Shami is expected to replace him after Bhuvi picked up a hamstring injury which ruled him out of two-three games.

In last match against Pakistan, Kuldeep Yadav is expected to be the game changer for India as he picked up three crucial wickets. However, in the previous games only Chahal has been able to scalp wickets during crucial times, while Kuldeep has conceded runs.

Afte the game versus Pakistan, it is evident that India will play Kuldeep and Chahal

India also has an extra spinner in Kedar Jadhav, who has been out of form in terms of batting due to lack of match practice. While, in terms of bowling, Kedar was smashed all over the park in his one-over spell against Australia

However, seeing the pitch, we think that India’s likely to go with their spin pair Kulcha.

For Afghanistan, nothing has gone right for the Gulbadin Naib-led team – be it batting or bowling. The Afghanistan bowlers have failed terribly at the biggest stage. And, it was evident in the match against England. During that match, we saw world’s number three ODI bowler Rashid Khan conceded 110 runs in just 9 overs.

Moreover, he went wicket-less. The Afghani leg spinner had overtaken former New Zealand fast bowler Martin Snedden, who conceded 105 runs in his 12 overs spell versus England, during the 1983 World Cup.

Overall, now, the leg spinner has registered his joint-second worst record in ODIs along with Wahab Riaz. However, Australia’s Michael Lewis remains to be the number one bowler who has conceded 113 in his 10 over quota.

The only positive from the game against England was – for the very first the Afghanistan batsman was able to bat out the full 50-overs. And, Hashmatullah Shahidi top scored with 76. While Rahmat Shah and Asghar Afghan chipped in with 46 and 44 respectively.